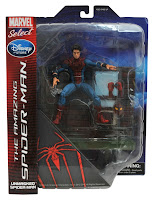 The Amazing Spider-Man is getting all kinds of buzz and looks like it's going to be a top notch adaptation of the wall crawler. Now DST has shipped a pretty awesome adaptation of their own with a Spidey figure based on the design from the film, and it's exclusive to Disney Stores and Marvelstore.com

The regular edition of Spider-Man is already in comic book stores (alongside the movie version of the Lizard), but even if you have that one, you're gonna want one of these new retailer variants.

Shipping at the same time to Marvelstore.com and Disneystore.com (and appearing on retail shelves of the real world Disney Store), both figs offer something different.

The Metallic Spider-Man is just that- he's got a shiny coat of metallic gloss over him. As neat as that may be, my pick of the two has to be the unmasked variant. A pair of heads (and hands) are included in the package so you can switch Spidey up to Peter Parker- complete with the likeness of the film's star, Andrew Garfield. 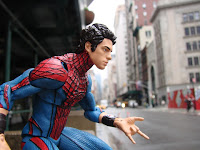 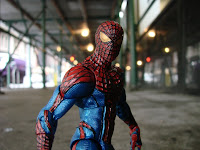 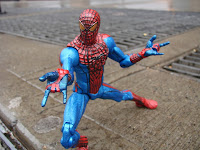 Be on the lookout for both special edition The Amazing Spider-Man figures to web swing into the Disney and Marvel stores early next month.
Posted by The Angry Spark at 5:11 PM