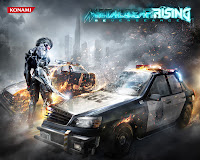 Taking home a load of 'best of show' awards this E3 was Konami. The longtime Japanese publisher brought a stellar lineup into the show and the press at large- they took note.

A massive 16 awards and nominations were handed out from different sites and publications for a number of games that the company was showing off at E3. The big star of the event? Metal Gear Rising: Revengeance.

The next game in the storied stealth/action Metal Gear franchise impressed and just edged out the second place Castlevania: Lords of Shadow - Mirror of Fate. MGR took home three awards and four noms while the 3DS' first Lords of Shadow title, Mirror of Fate, grabbed four 'best of's' and a pair of nominations.

As for me, I'd have to go with Castlevania as a whole as one of my 'properties' of E3 2012. The way that Konami has resurrected the Belmont's battle against the Lord of the Undead has truly been handled with style. Castlevania on the NES is one of the very first games I remember playing that I just couldn't put down and so far the reboot has treated it very well indeed. I'm looking very much forward to playing both the 3DS' and the Xbox 360/PS3's new entry's.

So who took what and from whom? Here's the full rundown: