SDCC: Diamond Select serves up a plate of awesome

The Diamond Select Toys booth at the San Diego Comic Con (#2607) is going to be absolutely jam packed this year with exclusives, giveaways, and prototypes.

Stop by the DST booth any time during the general show hours and you'll be treated to the company's assortment of excellent lineup figures from Marvel, The Walking Dead, and more. You'll also see a bunch of 'coming soon' items on display that just might pique your interest.

Although, you're probably not interested in Battle Beasts, Knight Rider, or The Expendables are you?

What about giveaways and signings? Any interest there? Well, just in case- here's the lineup of what's going down at the San Diego Convention Center.


Battle Beast Giveaways!Every morning from Thursday through Sunday, when the doors to the show open, DST will be giving out 200 individually bagged promotional Vorin Minimates, to celebrate the release of the first Battle Beasts Minimates 2-pack and the unveiling of the Series 1 prototypes! They'll be given out only while supplies last, so make booth 2607 your first stop of the day! And while you're there, enter to win a custom Battle Beasts guitar and guitar case, by Peavey and Coffin Case!
Battle Beasts Signing!On Friday, July 13, at 2:00, the writer of the Battle Beasts comic book for IDW, Bobby Curnow, and the artist of issue #1's incentive and Comic-Con-exclusive covers, Ulises Farinas, will be signing at the DST booth! There will be free posters given out for them both to sign, and the Comic-Con edition of issue #1 will be available for purchase!
Minimates Panel!On Saturday at 1:30, in Meeting Room 8, Diamond Select will host a panel, "Minimates Turn 10," which is all about - you guessed it -- Minimates! DSTChuck and DSTZach will answer your questions about everything Minimate-related, from Marvel to Battle Beasts to Thundercats to Universal Monsters! Plus, they'll show off some new designs, new Calico Jack's Pirate Raiders animation and give away some free stuff!
Build-A-Minimate!And don't forget that every day DST will open up the Build-A-Minimate booth to their Minimate-buying customers! Any Minimates purchase of $18 will get you a ticket to build your own custom Minimate from the cabinet of parts! Build-A-Minimate hours vary from day to day, so check the booth schedule to see when you can come back and build.
More More More!All that, and DST will be giving away free posters and buttons all weekend, so be sure to stop by! And be on the lookout for the DST Knight Rider car around town! 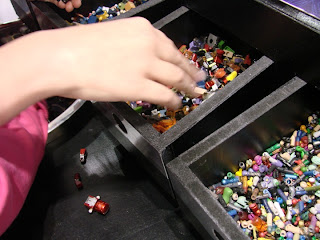 Here's a ProTip- make an $18 purchase and create your own mini-mate. It's tons of fun and you can really make some wildly original characters digging around in the parts pit. I made a battle-hardened time traveller decked out in Iron Man's chest plate and helm and wielding the Phoenix Force. Like I said- original. 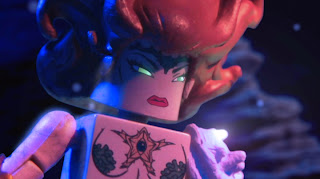