SDCC: Lasso yourself some Mezco exclusives

Mezco, makers of cool sci-fi/comic book collectables, have announced their full slate of Comic Con International exclusives. Included among the Batman, Catwoman, and Earthworm Jim is one awesome little Amazon.

That 20" tall Batman is pretty amazing, I'll give them that, but I want one of those Wonder Woman Mez-itz. WW figures are pretty rare, and this one's fitting of the isle of Themyscira. 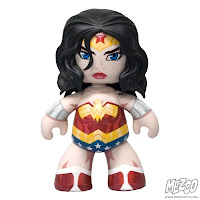 6" Metallic Wonder Woman Mez-itz -
Mez-Itz Wonder Woman is the first female character in the DC Universe lineup and the first to feature sculpted hair.
The Princess of the Amazons stands 6inches tall and features 5 points of articulation and a 1000 points of fun!
This Summer Exclusive version features an exclusive metallic finish and a real rope Lasso of Truth.
This is a non-numbered limited edition item.
Edition size TBD. 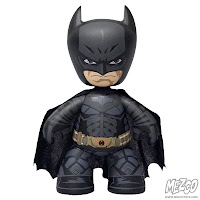 Dark Knight Mez-itz Mega Scale Batman-
Perhaps the greatest summer exclusive in the universe, Mezco proudly presents the Mega Scale Dark Knight Batman Mez-Itz. This 300% Batman Mez-Itz is based on Batman’s look  from the award wining blockbuster trio of films from Christopher Nolan. He measures 20 inches from the tip of his ears to the soles of his boots.
He features a real cloth black cape. Just like the standard Mez-Itz, he features 5 points of articulation and 1000 points of fun.
Mez-Itz Mega Scale Batman is securely packed in a sturdy full color box.
This is a non-numbered limited edition item. Edition size TBD. 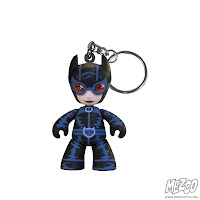 Catwoman Key Ring 2" Mez-itz -
Catwoman joins the Mez-Itz DC lineup. This feline fatale was voted #11 on the list of Best Villains ever, yet she still holds the key to the heart of Batman…or does she?
Catwoman stands 2inches tall and features 5 points of articulation and a sturdy metal clasp.
This is a non-numbered limited edition item.
Edition size TBD. 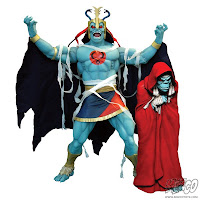 Glow-in-the-Dark Mumm-Ra and Decayed-form Mumm-Ra 2-Pack-
Now, for the 1st time, Mezco offers Mumm-Ra in both his forms!
From the secret chambers of the black pyramid on Third Earth comes Mumm-Ra, old and decrepit, he transforms himself into the powerful Mumm-Ra the Ever Living by reciting the incantation "Ancient spirits of evil, transform this decayed form to Mumm-Ra, the Ever-Living!"
Based on the the original animated series, this mega-scale figure is 14inches of evil ancient fury! Mezco’s Mumm-Ra is superbly detailed, perfectly capturing the essence of his villainy as he spreads wide his arms and swears to destroy Lion-O.
Mumm-Ra features 8 points of articulation as well as a real cloth cape and bandages.
This Summer Exclusive features a glow-in-the-dark blue skin and comes packed with a Decayed Form Mumm-Ra, created from an entirely new sculpt,  showing him in his decrepit natural state.
Both come packaged together in an oversized collector friendly box.
This is a non-numbered limited edition item.
Edition size TBD. 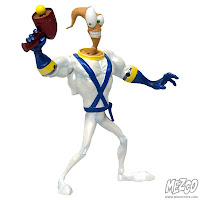 Metallic Earthworm Jim Action Figure
Evildoers beware as Mezco brings the intergalactic hero Earthworm Jim to life as an articulated figure! Jim comes complete with a game-accurate plasma blaster as well as his famous ultra-high-tech-indestructible-super-space-cyber-suit. The 6inch scale Earthworm Jim features 8 points of articulation. He comes complete not only with his plasma blaster, but with an alternate “bendy” unsuited worm body as well.
This Summer Exclusive edition features a special metallic finish ultra-high-tech-indestructible-super-space-cyber-suit. He also sports a special “groovy” head sculpt unique to this Summer Exclusive.
This is a non-numbered limited edition item.
Edition size TBD. 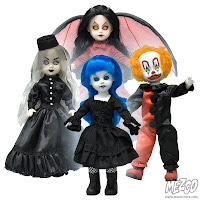 Living Dead Dolls Resurrection Set : Series 6
The Living Dead Dolls Resurrection Set claws it's way from the grave for 2012.
The latest dolls to be reimagined for the collection are:
Demonique- With the wings of a night creature.
Blue- With an elaborate new outfit,
Schitzo- With reimagined facepaint and a shocking new hairstyle.
Ms. Eerie- With a stylish new hat and period dress
All four feature glass-like eyes that seem to peer into your very soul.
Each member of this limited edition quartet of the damned comes with its own death certificate, and entombed in its own coffin.
This is a non-numbered limited edition item.
This is a limited edition of 300 sets worldwide.


That's a very strong lineup set for the show. If you can't make it, all hope is not lost. Aside from being sold at the company's booth (#3445), each and every one of these awesome toys will be available on Mezco's website too.
Posted by Jessica at 6:21 PM