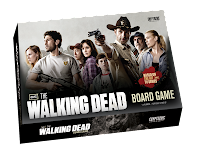 The Walking Dead is set to have a very strong presence at (non electronic) Game maker Cryptozoic's Comic Con booth- Bob Kirkman will be in attendance!

Not that the creator of the popular zompocalypse series will be on the floor trying to get you to buy a board game mind you, but he will be signing autographs. And he's not going it alone either as the Dead's own 'Glenn' actor Steven Yuen will also be on hand.

Kirkman's signing will be at the store on July 12th from 12noon to 1pm. Yuen will be there on the 14th from 2 to 4pm. The Cryptozoic Comic Con store is an actual store by the way, it's not in the convention center. It's located at 411 Market street in SD.

As for the stock at the shop, it's pretty sure to make any Waking Dead fan smile.

Launching on July 6th, Cryptozoic will unveil The Walking Dead Comic Book Trading Cards, complete with a limited edition binder and promo card. Available at the Cryptozoic Comic-Con Store, this must-have set offers a 90-card base set, plus a 90-card parallel foil base set, creator autographs, sketch cards based on the art from the critically acclaimed series, printing card plates and more.
Cryptozoic’s The Walking Dead Board Game hit stores in November 2011 and has already sold out twice! Very limited quantities of third printing will be available for the first time at the Cryptozoic Comic-Con Store.
Cryptozoic’s current line up rounds out with The Walking Dead Season One Trading Cards, which is quickly selling out! The set features several highly valuable exclusive items, including complete patches from both Shane and Rick, actor autograph cards and set-use wardrobe cards.

In addition to all this goodness, fans who attend Comic Con can expect to see new promos, exclusives, and events announced all show long. So pay attention!