MIMOBOT Rises with the Dark Knight

Designer flash drive maker MIMOBOT expands it's DC Universe roster with some more of the world's most adorable superhero collectables.

Of course, these are far more than your average comic book licensed toy- these are full on flash drives (or maybe I should say Flash drives) that come packed with bonuses like screensavers, avatars, and wallpapers.

The newest characters to join the line (Batman and Green Lantern were released last year) includes a pair from one of the biggest movies of this Summer and two guys who know a thing or two about super-speed.


"We're beyond thrilled to introduce these iconic and essential super heroes into the DC Comics X MIMOBOT line-up," says Scott Seraydarian, Director of Media at Mimoco. "Superman, in many ways, defined American pop-culture in the 20th Century, and The Flash is just perfect for our line of designer USB flash drives. We at Mimoco are also excited to see 'The Dark Knight Rises' when it hits theatres this summer and are pleased to take part with the release of our awesome new 'The Dark Knight Rises' Edition of Batman MIMOBOT flash drives." 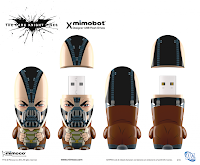 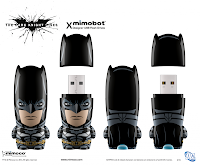 The little 'bots come in sizes of as large as 64gigs and are available now at www.mimoco.com and "select retail shops worldwide"- All except Bane that is. He'll be exclusively sold at the San Diego Comic Con... hope you got a ticket.
Posted by Jessica at 1:27 AM