Mimoco announced a brand new eighth wave of it's popular Star Wars Mimobots today. The series will hit just in time for the San Diego Comic Con and have one very cool exclusive to both the 'con and Star Wars Celebration VI.
The new set of Mimo's is based on the characters from Return of the Jedi and all come pre-loaded with the expected bonuses and digital goodies. It's got classic versions of Luke and Leia, some awesome new bots like Jabba- and as an added bonus, no Ewoks! 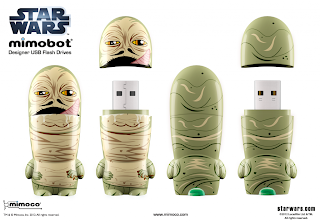 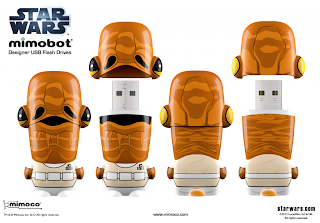 One of Star Wars fans' favorite characters, Admiral Ackbar didn't need much screen time to make an impression. He hates the Empire and he hates being surprised by operational shield generators! Ackbar is a Mon Calamari, a squid-like species equally at home on land, in the water, and in space. Admiral Ackbar MIMOBOT is equally at home on your desk, in your pocket, or plugged into your computer. Command the fleet of all your most important data and files with your Admiral Ackbar MIMOBOT. With a flash drive design this cool, you can't resist, can you? You might even say, it's a trap...! 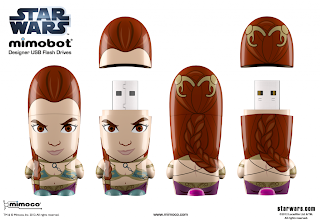 From her first appearance chained to Jabba's throne in Return of the Jedi, Slave Leia took her fate into her own hands and helped change the course of the galaxy, and did it all while looking good. She was the perfect balance of form and function, just like your Slave Leia MIMOBOT. With her sexy design and up to 64GBs of capacity, she's the perfect flash drive for storing and transporting all your digital data. 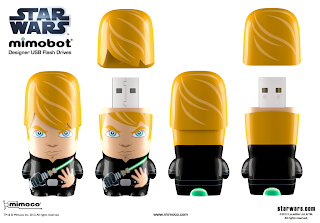 When last we saw Luke Skywalker at the end of The Empire Strikes Back, he was wearing comfy, loose fitting robes, and testing out his new mechanical hand. The Luke we encounter in Return of the Jedi is dressed all in black and means business. This is confident Luke. Powerful Luke. Jedi Luke. And Jedi Luke MIMOBOT is no different. Secure in his Jedi powers, he's also confident that no one, not Jabba, Vader, nor the Emperor himself can sway him to the dark side and endanger your most valued digital data. This Jedi Knight may be dressed in black, but he's all light. 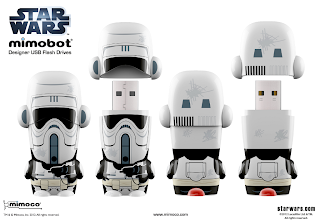 Native Ewoks scatter in the underbrush when Biker Scouts zip by on their speeder bikes, but just wait until some 'rebel scum' show up to take down that shield generator. That's when we see exactly what Biker Scouts are made of. Appearing on Return of the Jedi's forest moon of Endor, Biker Scout MIMOBOT will make his appearance as a joint San Diego Comic-Con and Star Wars Celebration VI exclusive. With a numbered release of only 1,000 units and a memory capacity of up to 64GBs, the limited edition Biker Scout MIMOBOT is the perfect designer USB flash drive for the die-hard Star Wars fan with data on the go.

Available in 8GB to 64GB capacities, the Star Wars MIMOBOT Series 8 collection lets you store and transport all your digital music, pics, documents, and more. And with exclusive preloaded digital extras like Mimory™ & mimoDesk™ suites of Star Wars-themed icons, avatars, screensavers, wallpapers, and the mimoByte™ sound software that plays authentic Star Wars audio clips when MIMOBOT is inserted or ejected from your computer, you get a whole lot of function with a whole lot of form.


Very hard to pick a favorite out of this lot! I think I'd have to go with Jabba or the Biker Scout though. Again, the Scout will only be available at the SDCC and the upcoming Star Wars Celebration (in Orlando, FL this August) too, so he's going to go fast and be super-limited. Grab one if you can and find out more at www.mimoco.com!