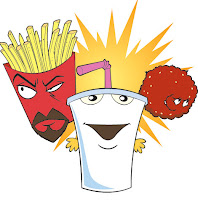 San Diego Comic Con prepare yourselves- this year adult swim is bringing new shows, Cat Grab for prizes, and Henry Winkler.
Yes the Fonz himself will be in attendance along with a bunch of other notables as the official panel discussion lineup has been announced for the Con.

The panels will be held in a private venue at the Hilton Bayfront, in the Indigo Ballroom. The slightly off-kilter programming block will kick off appropriately enough on Friday the 13th.

Childrens Hospital
Come watch a sneak peek of Childrens Hospital season 4 and hear from the show’s creative team, led by creator and star Rob Corddry and executive producer Jonathan Stern. They will be joined by members of the show’s ensemble cast of comedic heavyweights, including Lake Bell (How To Make It In America), Erinn Hayes (Parenthood), Rob Huebel (The Descendants) Henry Winkler (Happy Days) and Ken Marino (Party Down, The State). Childrens Hospital explores the emotional struggles and sexual politics of a group of doctors charged with healthy libidos. Paul Scheer (NTSF:SD:SUV::) will moderate the panel.

Aqua Something You Know Whatever / Squidbillies
Show creators Dave Willis, Jim Fortier and Matt Maiellaro will discuss their original series, show footage from the new seasons, and answer questions.

Black Dynamite
Creators and voice talent from the new animated series, based on the 2009 feature film, will give an exclusive preview of the show and answer questions.  The Black Dynamite animated series further chronicles the exploits of Black Dynamite and his crew. Executive producer Carl Jones (The Boondocks) will be on the panel in addition to: Michael Jai White (For Better or Worse, The Dark Knight, Why Did I Get Married?), Tommy Davidson (In Living Color), Kym Whitley (The Cleveland Show, Brian McKnight Show), Byron Minns (Mongo Wrestling Alliance), Debra Wilson (MadTV), Orlando Jones (Rules of Engagement), and Cedric Yarbourgh (The Boondocks). The panel will be moderated by Gary Anthony Williams (The Boondocks).

A full slate of signings has also been announced including representatives from Robot Chicken and (my personal favorite) Aqua Teen.