There's some really good stuff to be had this week from the land of the PSN. Chief among the offerings has to be the long awaited debut of Beyond Good and Evil HD.

The classic (-ly under appreciated) action title has been on Xbox LIVE for a while now but has finally arrived on the PSN for all your talking pig needs. Also this week: the Drake's Deception Demo, some nice little sale items, and free Streets of Rage II for PSPlus-ers.

Read all about it.
Posted by The Angry Spark at 2:18 PM

This week's Nintendo Download features an old friend- Kirby's Dreamland, the original Gameboy adventure is now available on the eShop. There's also a motocross racer with Moto eXtreme and some classic SNES RPGn' with Final Fantasy III (FFIV to Japanese audiences) for the Wii.

Have a look at the most hotly anticipated superhero game of the year- maybe ever. 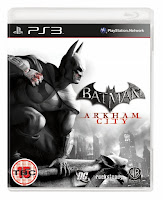 These are the European pack shots, but the US version shouldn't be all that different. Interestingly enough, there's no information yet about a special edition, but that seems like it's probably a forgone conclusion based on the sales of the first game.

Arkham City launches this October, and remember that a pre-order at Best Buy will net you the Robin character for use in the challenge map mode.

A long time ago in the Mac universe, there was a company called 'Bungie'. There they produced one of the best known and much beloved first person shooters to ever appear on the format- Marathon.

Since then, Bungie has gone on the produce the Halo series on the Xbox as well as re-printing the original Marathon in several different forms. And now they're coming home to Apple as the classic shooter blasts onto the iPad.

There's no word yet on whether the game will be enhanced or not, but it would probably be wise to expect a visual bump- this is Bungie after all. As for the story? Developer Daniel Bleznek says it won't be altered, as MCV reports:


"Marathon's story and gameplay are outstanding," he explains. "Durandal's descent into rampancy, his quirky humour and the hidden messages make excellent additions to the old school style.

No word on release yet but old school FPSers are sure to be chomping at the bit already-
Posted by The Angry Spark at 10:23 AM

For anyone who was expecting a deluge of quality Virtual Console games to start things out for the 3DS' fledgling online service, well, you were wrong.

Week one may have brought Mario and Zelda but here on week number 3 we get... Tennis? Yes, I suppose it is a classic Gameboy title- but really, is there anyone who was biting their lip in anticipation for... Tennis?

Anyway, there's also Mystery of Whiterock Castle this week for the Wii and the DS gets Stratego and some little dude with a fig leaf jumping around.

Developer Rocksteady Games was pretty adamant about not having the focus of these games shift too much off of the main man himself, Batman. But now, hot on the e3 announcement of Catwoman as playable with a storyline all to herself, comes word from Best Buy (of all places) that Robin is present and accounted for as well.

Reportedly the Boy Wonder will be a bonus exclusive challenge map character for Best Buy customers. But did Rocksteady really build a Robin character model just for some superfluous extra? Or might there be more to it? Nobody's saying anything as of yet and the game doesn't launch for the PS3 and Xbox 360 till the fall, so stay tuned true believers.

It looks that way as Hollywood trades are reporting today that Crowe is currently in negotiations to play Superman's Kryptonian father in the upcoming Warner Bros. reboot of the franchise.

If true, perhaps the casting of such a high profile star might signal that Krypton and it's cataclysmic end might feature more prominently here than in the earlier films. If it turns out to be anything like the movie that ushered in the excellent Superman: The Animated Series, then we'll be very happy fanboys & girls.

Email ThisBlogThis!Share to TwitterShare to FacebookShare to Pinterest
Labels: movies

Surprise! Look Who's in The Dark Knight Rises

Think you know who the villains are in the third (and final Nolan) Batman film? Think again-

Email ThisBlogThis!Share to TwitterShare to FacebookShare to Pinterest
Labels: movies

Strange to think it but IBM was making early computers during the second world war. Crazy stuff- read all about the company and their storied history right here.


"Too many went too far with their reviews." "We are reviewing who gets games next time and who doesn't based on today's venom."

The comment is now gone off of Twitter so the quote isn't exact- and while we definitely see the point as it does seem that a lot of the more 'venomous' reviews seem to forget what actually goes into the Duke games as far as outlandish content- this is going way too far.

Reviews must by definition be honest. If the reviewer feels a particular way about a product, movie, or game- they've got to come out with it in the written piece. That's the bottom line.

Okay, it's not actually a game per say- it's an App the lets you keep track of your Halo: Reach stats on the go. That's right... it's kinda useless, but it does have some redeeming features.

The Bungie.net Mobile App allows you to view your friends stats as well, plus the ability to pick up free account bonuses, gift things to your buddies, and watch the company's news feed.

So not too bad overall if you're a big fan of the developer. But it's the old foot in the door that's the bottom line isn't it? With one overarching App that establishes the company on the App Store- more will be on the way- Bungie is promising as much in a statement made this morning.

Keep watching the store-
Posted by The Angry Spark at 2:00 PM

Acclaimed Xbox LIVE Arcade title Outland finally makes it's PSN appearance today. Plus members also get a free copy of Streets of Rage 2 and card battle enthusiasts are now free to pick up a pack of Magic the Gathering: Duels of the Plainswalkers.

'Not yet' as in 'not yet'. Nintendo has updated their weekly drop of downloaded goodies to land on Thursdays instead of Mondays.

The 3DS version of the service, the eShop, will be the main focus as the new console gets it's first update after the release of Mario Land and Link's Awakening last week. So... we'll see you Thursday?

Very interesting little piece on Gamasutra about Best Buy. It's an interview from e3 that covers their fledgling used game program, they talk about the full rollout, an initiative to have gaming specialists, and more-

Email ThisBlogThis!Share to TwitterShare to FacebookShare to Pinterest
Labels: industry

Loads of updates from the show floor this week as well as some nice little sale prices on the Tom Clancy games. Nothing in the way of fresh content but with all that free stuff we got in the Welcome Back package last week, we can forgive 'em! Right?

This late summer/fall, there's no firm release date yet- Warner Bros Interactive will release the Batman themed FPS, Imposters on Xbox LIVE, The PSN, and the PC. 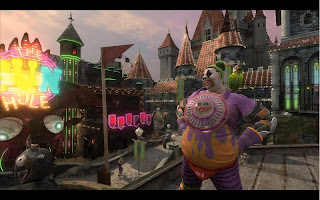 The download only affair will feature players in the roles of gang members for either The Bats or The Jokerz and will also showcase some heavy customization options. Read on for screens and the full presser-

The long awaited fate of the Chief will have to wait one more year- the game doesn't release till Holiday 2012.

A 'remastered' Halo has been one of the worst kept secrets this past year, but now it's official:

Rise of Nightmares for Kinect gets a Trailer

SEGA's Rise of Nightmares for the Xbox Kinect brings the 'mature' to the peripheral.

What is it about old music and horror?

Nintendo Officially Announces the Next Wii- The Wii U

No, I didn't make up that name- and yes, that is one big honkin' control pad. 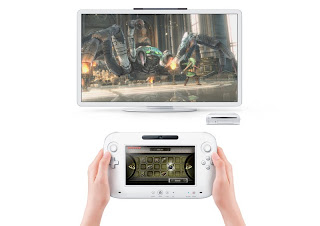 Email ThisBlogThis!Share to TwitterShare to FacebookShare to Pinterest
Labels: e3, nintendo, Wii U

The epic action/RPG sequel that just hit the PC last month has officially been announced for release on the Xbox 360 before the end of the year. A Playstation 3 version of the game hasn't been mentioned so far but fans may recall that a Witcher title was already in the works for the 360 late last year. The game was canceled for unknown reasons.


If you haven't been paying attention, W2 is getting rave reviews with a Metascore of over 85%. At least console players will get some Geralt, which is definitely better than no Geralt.

Deep Silver and Apogee Software's Critical Mass for the Nintendo DS has had a bit of a rocky time fighting it's way to retail shelves. At one point, the portable Duke-fest even lost it's star and was going to be a generic third-person shooter.

But, try as folks might, you just can't keep Duke down, so we're getting a a generic third-person shooter with Duke Nukem in it. Yay?

PSN Store is Back!

The PSN has been up for a little while now for multiplayer in North America, but today is the first day that you can actually go into the online storefront and buy something. Maybe.

Email ThisBlogThis!Share to TwitterShare to FacebookShare to Pinterest
Labels: PSN

It's really strange in it's wording, but I'm going to attribute that to English as a second language errors. Check it out here.
Posted by The Angry Spark at 12:32 PM

Free for Xbox LIVE Gold level members, the Dead Space 2 'Outbreak' map pack gives you a pair of new multiplayer maps the slice and dice your way through. Get it here.
Posted by The Angry Spark at 4:34 PM