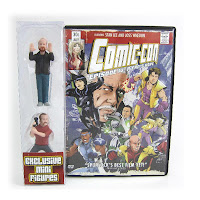 Morgan Spurlock's inside look at fandom and the biggest entertainment event of the year is about to see release on DVD... and it comes packed with a Joss Whedon action figure?

Sort of anyway- it's more of a non-action figure, but you get the idea.

Included in a pair of Collector's Edition packages (there's a standard release too) are a pair of action figure two packs. Fans can pick between the dynamic duo of Stan (the man) Lee and Harry Knowles (of Ain't it Cool News fame) or Whedon and Spurlock himself (pictured).

The CE's will cost you $29.99 while the standard old vanilla version will retail for $19.99. So for only ten bucks more you get a Joss Whedon figurine. Not a bad price to pay for the director of one of the biggest movies of all time.


COMIC-CON EPISODE IV: A FAN'S HOPE explores this amazing cultural phenomenon by following the lives of five attendees as they descend upon the ultimate geek mecca at San Diego Comic-Con 2010.
One on one interviews with Comic-Con veterans who have turned their passions into professions include Stan Lee, Joss Whedon, Frank Miller, Kevin Smith, Matt Groening, Seth Rogen, Eli Roth and others are shared throughout the film along with up close and up front coverage of all the panels, parades, photos, costumes, crowds and camaraderie that make up one of the largest fan gatherings in the U.S.
COMIC- CON EPISODE IV: A FAN'S HOPE was released theatrically and on VOD in early April 2012.

Look for Comic Con Episode IV: A Fan's Hope at retail on July 10th.
Posted by Jessica at 12:59 AM