Radical's Prototype 2 is getting ready to consume mass quantities next month. If you haven't pre-ordered the game yet, you might want to as both Amazon and Best Buy have some nice little incentives.

Amazon is always a favorite of game fans and they've got a pretty cool bonus in the form of a downloadable version of issue #1 of the new Prototype comic from Dark Horse. Titled 'The Anchor', the inaugural volume of the book tells the story of Alex Mercer's (the hero of the first game) spiral into darkness.

If you'd rather order from your neighborhood Best Buy (or BB online for that matter) you'll be getting a really awesome settlbook case to house your copy, as well as the 'Hardened Steel' vehicle upgrade. That's for use in game- it won't make your actual car any tougher. 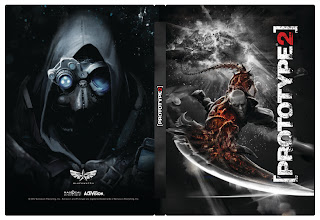 And, of course, everybody who manages to get one of the first run copies of the game will get in on Radnet:

So there you go early birds. Just don't wait too long because Prototype 2 launches this April the 24th on consoles and July the 24th (I guess somebody likes the number 24... or maybe Jack Bauer) on the PC.
Posted by The Angry Spark at 2:17 PM