And the Top Eleven Reasons to get Prototype 2 are... 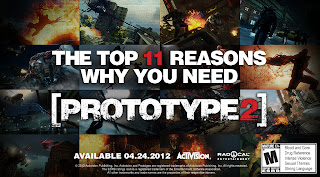 The sequel to Radical and Activision's Prototype is fast approaching it's April launch date. Fans probably won't need them, but the newest trailer for the open world actioner gives potential players 11 reasons to pick Prototype 2.

As somebody who thought the original was pretty awesome (and way under-appreciated) just as it was, I can honestly say that P2's looking like it's leaps and viral infected bounds better. Mr. Heller is bringing along improved graphics, new attack moves, and a very slick revenge story.

Just in case you need a little extra push over that proverbial fence though, here's eleven reasons to pick a side and fall off. Why eleven? Uhhh...