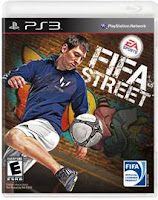 Blasting out of the field and onto whatever they can find, the stars of EA's FIFA Street are out on retail shelves in the US today.


From the creators of the award-winning EA SPORTS FIFA Soccer franchise, and powered by the revolutionary FIFA Soccer gameplay engine, FIFA Street delivers an arsenal of authentic street dribbling styles and trick moves that ignite the one-on-one battles. Utilize the groundbreaking new Street Ball Control to experience the highest fidelity of touch on the ball and responsiveness ever developed by the FIFA Soccer franchise. Compete everywhere from parking lots to prestigious 5v5 futsal-style tournaments on the streets of the world’s most renowned cities. Enjoy unique and entertaining game modes like Panna Rules and the new Last Man Standing, which were created exclusively by the FIFA Street team. Play with and against the stars of the most popular clubs in the world—or real-life street players—and compete at more than 35 locations in the world.

The title is getting excellent reviews and sports (ahem) a really nice World Tour story mode where players can assemble a team of friends to compete against other teams online across Xbox Live and the PSN. You can also track your stats and accomplishments in World Tour, as well as complete weekly for updating goals (no pun intended this time).