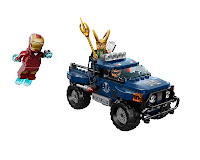 Sets based on the forthcoming Avengers movie and the Marvel U in general are heading to store shelves soon. If you love LEGO, comic books, or any combination of the two- you're gonna seriously dig these kits.


So basically, it looks like we're seeing examples of three different lines with these new promo shots. 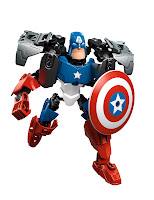 The 'Buildable Figures' line continues from the DC Universe series here with at least a Captain America fig. How many more we'll see, I'm not sure but I'd figure on Iron Man and maybe Thor

In the shot above and the one below, we see Avengers movie sets. It's nice to see that multiple big time characters will be lumped together into single building kits like the SHIELD truck above. Iron Man, Loki, and (I think) Hawkeye all look great too- I'm especially liking the repulsor effects on Tony. 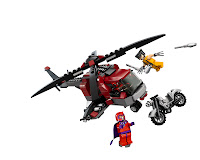 And finally, it seems that we will be seeing a general Marvel Universe line to match the DC series. The chopper pictured is cool enough, but mini-figures of Magneto, Wolverine, and Deadpool (!) are just plain awesome. I'm very excited to see where this particular part of the Marvel lineup goes in the future- there's a lot of room to build a catalog of amazing sets. Here's to hoping for the X-Mansion and a Sentinel set.

We don't have any pricing or release dates as of yet on these bad boys as of yet, but you could probably bet on seeing them around Avengers time. That's May 4th, just in case you have it marked off on your calendars... oh who are we kidding, of course you do.
Posted by The Angry Spark at 1:00 PM