After appearing online for a while now, the strip is making it's way to the printed page as a part of Dark Horse Presents. This is a particular thrill for Russell as he's quite the fan.

“One of the first books that got me into comics in the nineties was the original black-and-white Dark Horse Presents—back when it was serializing stuff like Sin City and The One Trick Rip-Off and Hellboy: The Wolves of Saint August,” said Russell. “So as you can imagine, getting to submit a few strips for DHP was a huge moment for me personally as well as professionally.” 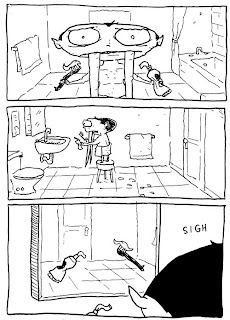 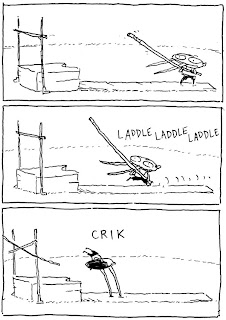 For the Dark Horse Presents run, fans of toothy should expect a few changes and a pretty big surprise.

“Porting my webcomic over to DHP was an awesome experience for three very specific reasons,” said Russell. “One, I got to add color to the strip, with the help of ace cartoonist/colorist/brother-in-arms Bill Mudron. Two, I received some first-class professional editing from Scott Allie and Daniel Chabon. And three, I swung for the fences and asked if I could draw a crossover strip where the Sabertooth Vampire fought one particular world-famous Dark Horse character, and to my delighted surprise, that character’s creator said yes.”

Look for The Sabertooth Vampire in DHP issues #12 & #14, which'll be on sale 5/23 and 7/18 respectively. Oh, one more thing about the lil' guy straight from Russell: "Also he turns into a really pathetic bat.” If that doesn't make you want to read the tiny vamp's story, I don't think anything will. 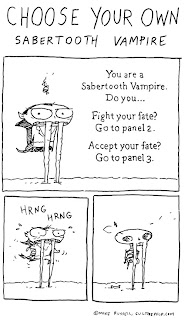