Madden Cover Tourney Continues to Round 2

The tournament to crown the next cover star of the Madden NFL series is in full swing now and has officially kicked off the voting for round two. So who's moved on? A few surprises actually...

Probably the biggest shock is that fan fave Tim Tebow is out of the running, losing to Arian Foster. Also all set for the second bell- it's a battle for NY as Victor Cruz faces off against Darelle Revis. 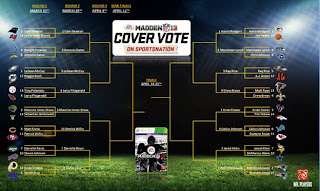 Well, what are you waiting for football fans- git to voting for your favorites at  www.ESPN.com/MaddenVote And don't forget to join in on the discussion at Fans www.facebook.com/EASPORTSMaddenNFL or www.facebook.com/SportsNation
Posted by The Angry Spark at 2:30 PM