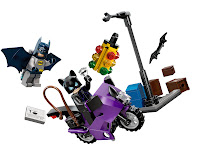 Just in case you're a LEGO fan and you've been living under a rock, here's a handy dandy look at some of the current DC Universe sets out for purchase in the retail wilds.

LEGO's latest DC effort (the first being LEGO Batman) is focused on the Dark Knight for now, but I'd look for that to expand as the line continues.

Not to say that the Gotham-centric kits are stinkers (because they're quite the opposite), but one of the brightest shining stars of the series for me has been the Superman (and Wonder Woman) vs Lex Luthor kit. It's just so darned cool to see these characters in mini-figure form! I'd be shocked if we didn't see more DCU heroes and villains making the transition to mini-figure before the year is out. *cough*cough*Aquaman*cough*Flash*

There are also a ton of settings that deserve to make the grade as full on kits. Locations like the Justice League meeting room, Ferris Airfield (from Green Lantern), and Darkseid's world of Apokalypse would all be great additions to any fans collection.

And with the increased popularity of the DC pantheon stemming out of the New 52 comic event, I'm personally crossing my fingers for Aquaman's Atlantis and a mini-Deathstroke. I can dream can't I?


The above sets are all out on store shelves right now (providing you can find them). Even though the Lex Luthor set isn't shown here- you really should check it out if you're a DC fan. It's full of kryptonite powered awesome.
Posted by The Angry Spark at 3:16 PM