Hack'n'Slash Your Way to Booty in Blades of Time

Konami's newest is a familiar looking jaunt through a sword and sorcery laden world- and it's all for the loot.

Developed by Gaijin Entertainment for the Xbox 360 and PS3, Blades of Time follows young adventurer Ayumi and her mentor Zero as they quest for treasure on a deserted island. The trick, of course, is that the island is chock full of monsters and some bad guys trying their darndest to keep Dragonland's secrets, uh... secret.


In Blades of Time, players don the persona of the gorgeous treasure hunter, Ayumi. Deadly with both guns and swords,  Ayumi finds herself in a remote land of lush trees and majestic landscapes. On the hunt for treasure, she quickly learns that she's not alone on this island. Armed with her dual katanas and arsenal of rifles, she'll do battle with gargoyles, monsters and various sinister forces to uncover the secrets of this dangerous place. As carves a path of destruction through Dragonland, she accumulates more powers and better weaponry that make for a thrilling and rewarding game experience.

The graphics look pretty nice on BoT and the hook seems pretty cool too. Ayumi doesn't just use magic, she can also control the flow of time (like Blinx!) and rewind the action to solve puzzles by actually making clones of herself. 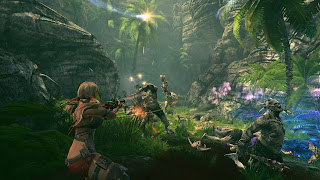 For more info on Blades of Time (which is available now), check out Konami's site here.
Posted by The Angry Spark at 10:32 AM