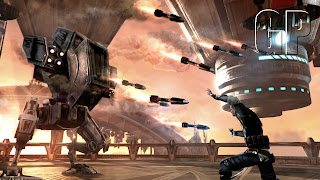 The Force Unleashed II is a fun romp. I had a lot of fun with this game- the storytelling remains very good, the graphics are excellent in places and well done overall and of course, the voice acting is once again *mostly* a treat.

And by the way, Starkiller- or Galen Marek -is an awesome hero. What a great character, I think the last  Star Wars gaming character that was this well put together has to have been Kyle Katarn of Dark Forces fame.

If this sounds like an awful lot of praise, it is- but there's one thing that holds TFU2 back from greatness.

It's the scope. If the first game was an epic tale, which I will gladly say I consider it, then the sequel is more like the epilogue. It fits with the first title, it continues the story of Darth Vader's secret (failed) apprentice- it's just waaaay smaller in scale.

If you're unfamiliar with Mr. Marek- he's the son of a Jedi that Vader killed as he continued the purge of the order from the galaxy after the Clone Wars were over and the Empire had attained a firm grasp on control.

The long and the short of it is that Vader takes the young boy in and grooms him as his apprentice, the goal being to knock off the Emperor and seize control for himself- much like he offered to his son Luke in the original trilogy. It doesn't go as planned though and Starkiller falls in love with his pilot Juno Eclipse and joins the newly formed rebellion. As the first FU ends, Vader has killed Starkiller in a duel inside the Death Star. (that's the 'official' ending, the game actually had a choice system that allowed you to become a Sith- it's a feature that was mostly done away with for the sequel, a good move in my opinion as Starkiller is clearly a heroic character.)

But is he actually dead? That's part of the story of The Force Unleashed II as Vader leads the defiant Jedi to believe he's just a clone of his former self- his mentor from the first title, Jedi Master Rahm Kota, returns and insists Starkiller's the real deal and not a clone at all.

I won't spoil what happens but the game takes some really interesting twists and turns as the tale progresses. It is a good story, it just doesn't have that galaxy shattering feel the first game had.

And I guess that's really the only problem I had with it. From every other standpoint, TFU2 is a solid game: There are new Force Powers, upgraded old ones, dual lightsabers with a load of customized blades that actually affect play (differing blades enhance healing, force gauge re-filling, etc...), less 'choose your own adventure' moments, and less quick time events (yay).

Bottom line- if you're a Star Wars fan, you're going to like this game. If you're not? Actually it's still a fun time- just a bit more of an average action title if you're not at least partially in it for the fiction's elements. Think good, not great.

Recommended.
Posted by The Angry Spark at 12:30 PM