The new Deus Ex, Human Revolution, has been a very mysterious game. There wasn't much to see in the way of screens or video- but, as Batman said to Penguin, things change.

1. Is every option (choice you have to make in order to progress) obvious/presented clearly before you?
No. Absolutely not. Some choices will be presented in ways that the outcome will be more obvious but, a lot of choices will be more or less hidden in the challenges you face and in the narrative. Depending on how you react, later outcomes will vary. We didn't want to make a game where all the choices are telegraphed because it makes the choice more often than not based on how you want to boost your character as opposed as being immersed in the fantasy of the game. It's definitely more subtle than a lot of games.

2.             Will we encounter books, news terminals, newspapers, ATMs; and will some even be influenced by your own actions?
You will encounter a lot of things to read like newspapers, eBooks, etc. Unfortunately, we had to cut the ATMs because we were running out of time.

3.             How many items will Adam be able to carry, and does this exclude weapons?
Depends on the size of your inventory. If you invest in it, you'll carry a lot and if you don't, you'll have to make difficult choices on what to keep with you or not. It includes everything but "story items".

4.             Regarding the Icarus Landing system: Is there any scientific research or advancement made that support the concept behind this aug? How can it be done?
The Icarus Landing System is a discreet augmentation surgically implanted in the user's lower back, slightly above the coccyx at the base of the vertebral column. The device has an accelerative descent sensor built in; in freefall, the unit will automatically activate the patented High-Fall Safeguard System, an EMF decelerator generating a fixed-focus electromagnetic lensing field, projected downward along the plane of the drop. This field pushes against the Earth's magnetosphere and slows the user's descent to a manageable velocity, allowing him to fall from almost any height (within reason) to a relatively soft landing.

5.             Will augmentations be permanent once installed, or can players mix-and-match augs or remove them?
There are indeed permanent.

6.             How do augmentations like the claymore work when Adam wears his coat?
There are holes in his coat that allows for the claymore to work perfectly fine.

7.             How are the augmentations divided amongst the four pillars that have been mentioned?
There divided in different categories like Cranium, arms, legs, torso, etc.

8.             What are the augmentations that Adam starts out with?
Single Takedown, IFF, Retinal Prosthesis, basic hacking ability and the Infolink essentially.

9.             How does health regeneration work? What will trigger it, how fast is it going to be, will it use energy?
When you take damage your health goes down. If you have being hit for "x" seconds, than it starts to regenerate somewhat slowly. It's not as quick as games like Halo or CoD. You really need to stay out of the firing zone otherwise you won't last long. When in trouble, you can use consumables (if you have any) to replenish it faster or to boost your health when it's already full.

10.          Will there be weapon stores for purchasing ammunition and tools?
Yes, there are some hidden merchants offering different kind of weapons and items. You need to find them though.

11.          If players choose to play in a certain manner, they're presumably going to be doing a lot of hacking throughout this game. Considering it sounds like the hacking minigame is quite complex (and presumably at least reasonably time consuming) what have you done to ensure that it doesn't get incredibly tedious over time (Bioshock's hacking minigame as a poor example)?
Every hacking session is different. Based on your level of hacking augmentations, the chances that the Sub-Routine will detect you will vary. And each time, you need to adapt to what happens. Also, there are some rewards (credits, virus programs, etc.) that can be accessed but always while managing the Sub-Routine system trying to catch you. So, it becomes a game of adaptation and  how much risks are you willing to take to get additional rewards.

12.          Will I be able to pick all pieces of junk and different stuff just like in DX1 and use them to distract enemies or do something else with it?
You'll be able to use different types of boxes to distract NPCs indeed. If you're referring to things like a pencil or a glass the answer is no. We have a very detailed and rich world to discover so we had to make some tradeoffs in terms of the scope of interactive objects in order to keep a smooth framerate.

15.          Are we able to HOLSTER OUR WEAPON in Deus Ex Human Revolution?
Of course we are. Deus Ex is not a typical shooter when it's all about gunning down enemies. Your journey brings you in civilized places where guns are not well appreciated. So, holstering it will make people more willing to speak to you. Who would chat with someone pointing a gun on our head? 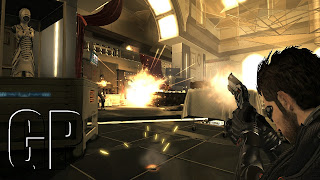 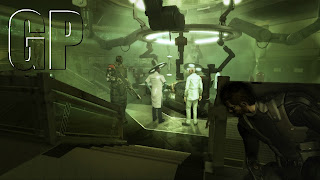 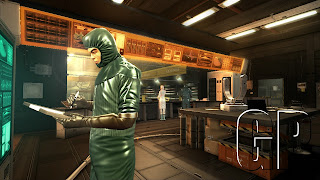