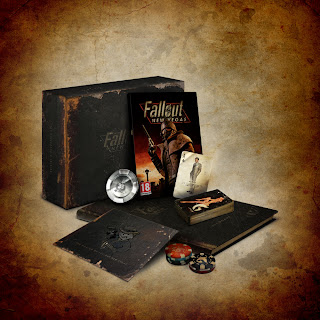 Despite being notably buggy and in desperate need of a patch (which is coming soon BTW), Vegas has shipped five million copies worldwide and when you factor in digital downloads- has $300 mil worth of sales in it's pockets.

Something to crow about for publisher(s) Bethesda-Zenimax. Full release after the break-

Bethesda Softworks®, a ZeniMax Media company, announced today that its highly anticipated title, Fallout®: New Vegas, has enjoyed record sales at launch, reflecting the huge consumer demand for the game. Five million units of Fallout: New Vegas were shipped worldwide for the Xbox 360®video game and entertainment system from Microsoft, PlayStation®3 computer entertainment system, and Games for Windows®, with a heavy volume of digital downloads, representing well over $300 million in retail sales. In addition, the Fallout: New Vegas strategy guide was one of Amazon’s best sellers among all books.

“We are delighted by the reception Fallout: New Vegas has received from fans around the world,” said Vlatko Andonov, president of Bethesda Softworks. ”Despite the large launch quantities for this title, we have already received substantial re-orders from our retail partners, underscoring the tremendous popularity of this highly entertaining game. We believe Fallout: New Vegas will be the “must buy” title for gamers throughout the holiday season.”

Reviews of Fallout: New Vegas have called the game “an utterly essential purchase” (MSN UK) and “addictively, rambunctiously fun” (Entertainment Weekly). The Associated Press awarded it 4 out of 4 stars and said “Bottom Line: It’s a Blast”, while GameSpy gave it 4.5 out of 5 stars and called Fallout: New Vegas “one of the best games of the year.”

Fallout: New Vegas, the follow-up to Fallout 3 – the 2008 Game of the Year – brings this beloved franchise to a location only Fallout could do justice: Vegas. Fallout: New Vegas takes all the action, humour and post-apocalyptic grime and grit of this legendary series, and raises the stakes. For more information on Fallout: New Vegas, visit http://fallout.bethsoft.com.
Posted by The Angry Spark at 2:00 PM