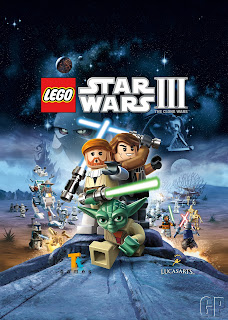 If the thought of yet another Lego game isn't enough to thrill you (you soulless thing) you might want to keep reading because there are some new things to do in that blocky galaxy far, far, away.

Number one on the list of new stuff is some kind of RTS-lite gameplay with squads of clone troopers.Yes, the promised new engine will (hopefully) be nice but this sounds pretty good:

That's almost enough right there to get me on board. To be honest, I love the Lego games but they are getting a bit stale. Every one of them is exactly the same- Lego Batman might as well just be Lego Indiana Jones with a cape.

The series definitely needed some new ways to play- lets hope is goes as well in game when it's released some time in 2011 as it sounds on paper.

Full feature set after the break-

New Story – For the first time, players will experience their favourite storiesfrom Star Wars: The Clone Wars, retold in the amazing LEGO world that fans know and love.

SceneSwap – Authentic to the Star Wars experience, a new feature allows players to take control of multiple teams in separate locations. Working together to complete various objectives, players will control each team through the press of a button, while playing in single player or in multiplayer co-op modes.

All New Boss Battles – For the first time in the LEGO Star Wars franchise, fans will fight against massive bosses as seen in The Clone Wars animated series, including Gor, the epic Zillo Beast and many other favourites.

Multi-Layered Space Battles – Players will be able to take off in their favourite ships to navigate and fly through multi-layered combat throughout the galaxy.

Explore the Galaxy – Players will be able to explore exotic locations in a variety of ships throughout 16 different star systems.  Fans will play as villainous Separatists, the noble Republic  heroes or even as bounty hunters, tracking down characters across the galaxy.

Expanded Force Abilities – Using the Force in all new ways to control LEGO objects, players will solve puzzles, access new areas, pick up and throw enemies - even turning them into weapons.

Brand New Clone Weapons, Vehicles and Characters – New clone weapons including rapid fire guns and rocket launchers, as well as all new massive capital ships to explore, such as Anakin Skywalker’s  flagship the Resolute and Grievous’ devastating warship , the Malevolance.    Players will also navigate through the galaxy in new vehicles such as the Republic gunship, Clone Turbo Tank and even Anakin’s Jedi Intercepter and the Twilight.  Fans will also discover their favourite classic characters such as Darth Vader, Chewbacca and Luke Skywalker.

Puzzle Solving – The game will feature all new puzzles that reward creative thinking through the use of teamwork and unique building situations only possible in a LEGO galaxy far, far away.

All new lighting and animations – A brand new engine brings characters to life, giving players a whole new level of control in a vibrant environment, unlike anything ever seen before in a LEGO game.

Split Screen – Improved dynamic split screen for multi-player co-op with jump in/jump out abilities for friends and families to play together.
Posted by The Angry Spark at 10:00 AM