At long last Nintendo will start offering demo's of it's WiiWare game catalog.


Nintendo will offer demo versions of select video games for its WiiWare™ downloadable game service starting Nov. 22. Wii™ owners with a broadband Internet connection will be able to visit the Wii Shop Channel to access demo versions of WiiWare games without using up any Wii Points™. The demos will allow people to sample a wide selection of games to help them decide which ones best suit their tastes.

The first few games to take part in the new program are Bit.Trip.Fate, ThruSpace, and And Yet It Moves- whose name still creeps me out for some reason. 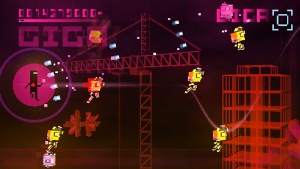 This is actually fairly big news for the WiiWare platform which, unlike Xbox LIVE and the PSN, has never before offered any kind of sustained demo service to compliment it's paid offerings. It's a good move that I actually think will increase sales.

Anyone who might have been apprehensive to try a new game (and never drop any Nintendo points on it) can now try it first for free and see if it warrants a purchase.
Posted by The Angry Spark at 11:21 AM