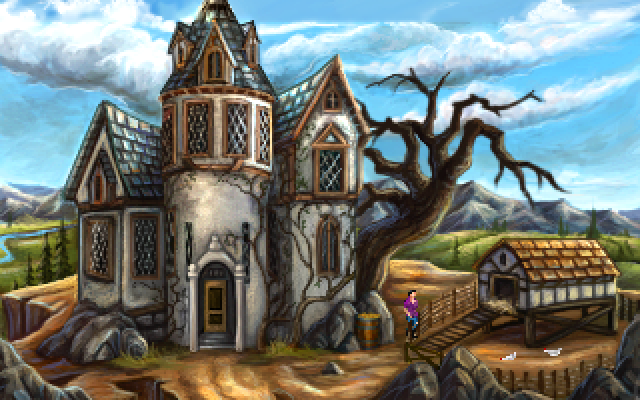 AGD Interactive has been quietly remaking some of the most beloved adventure games of all time with the King's Quest series. Parts 1 & 2 have been available for a while (as well as Quest for Glory) and now the third title in the trilogy, King's Quest 3 Redux, is complete.

All of the titles are comprehensive remakes- with some improvements -and all are free to download. It's a lot of classic PC gaming for zero dollars and who doesn't like that? The developer, ADGI, released all of the games for no cost because they were basically a group of fans who just wanted to update some classics- were is important here because that's about to change. The King's Quest remakes will remain free but the developer is going pro and heading into the commercial landscape.

Description of what to expect from the first two Quests is post jump, the third game in the series will be out at the end of February. We'll have a look at that one as soon as we get more-

* King’s Quest I: Quest for the Crown is a straight remake of Sierra’s first King’s Quest game, with all of the original gameplay preserved. (Based on fan feedback, AGDI did implement a “no dead-ends” option that prevents getting irreversibly stuck, but masochists -- err, I mean purists -- can turn this off!) To download for PC or Mac, go here: http://www.agdinteractive.com/games/kq1/download/download.html
* King’s Quest II: Romancing the Stones is a creative retelling of Sierra’s second King’s Quest game that spins the original’s (fairly random) puzzles into a comprehensive story. For those who have not played King’s Quest II, AGDI’s remake is a more satisfying continuation of the series than the original game, and for those who have, it’s a neat way to experience the original from an entirely new perspective. It also sets up a new overarching subplot that the team continues to explore in the upcoming King’s Quest III Redux, so playing it now will help you prepare for the game to come! To download for PC or Mac, go here: http://www.agdinteractive.com/games/kq2/download/download.html
All of AGDI’s King’s Quest remakes feature enhanced game visuals including hand painted backgrounds and character portraits, full voice acting (with former Sierra employee Josh Mandel reprising his role as King Graham!), lip sync, and digital soundtracks. Plus they’re free to download, and run on today’s computers without fiddling. The games were created using the Adventure Game Studio engine
Posted by The Angry Spark at 4:00 PM