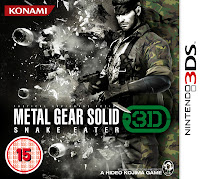 Get ready to go back to the Cold War and the 1960s... or at the very least, back to a few years ago to relive Konami's third game in the Metal Gear Solid saga, Snake Eater, in the glorious third dimension.

The 3DS has been on fire since the Holiday season with some excellent (not to mention big name) releases. That's not about to change this week as Solid Snake creeps his way onto the console.


Set during the Cold War of the 60s METAL GEAR SOLID SNAKE EATER 3D sees series hero Snake infiltrating the Soviet jungle to bring back a scientist being held against his will. Beginning on the outskirts of a military base, the player must use Snake's stealth skills along with the foliage and shade that the jungle offers as cover to infiltrate unseen. As the game progresses, old faces make unwelcome appearances and a series of terrifying boss characters must be defeated before leading up to a dramatic twist that brings Snake face to face with a key figure from his past.

But this little guy is more than just a re-play of the classic PS2 game. Konami added in a bunch of stuff to make the action/espionage title something special for 3DS owners.
Not huge changes to be sure, but why mess up what's already a great game with gimmicks? If you haven't played Snake Eater before, or just want a portable version of it, Metal Gear Solid 3: Snake Eater 3D might be one to watch. It's available now at retail everywhere.
Posted by The Angry Spark at 3:51 PM