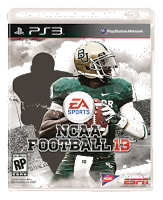 Not just one, but a pair of athletes will grace the cover of EA's upcoming NCAA '12 college footballer. Baylor allum take note-

None other than Robert Griffin III (or RG3) will be one half of the dynamic duo that will feature on the box front when football fans head out to pick up the game later this Summer.

The pair will be a representative of a current and former great of the NCAA. On the one hand, you've got Griffin- the Baylor QB has a Heisman sitting on his mantle (among other honors) and a catchy nickname.

The first student-athlete from Baylor to win the Heisman Trophy, Robert Griffin III – popularly known as “RG3”— also won the Davey O’Brien Award and was named the Associated Press College Football Player of the Year in 2011.  In 2008, RG3 was named the Big 12 Conference Offensive Freshman of the Year by the league’s coaches, setting the school’s rushing yards record for a freshman and for a quarterback with 843 yards for the season.

So who's the other lucky player? That 'Great' honor is kind of up to you:

Personally, my vote's for Flutie. I always had a soft spot for that little guy...