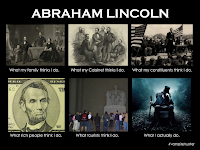 Get ready to think of Abraham Lincoln as a badass, undead slayin', mofo. The first trailer for the upcoming movie based on the Abraham Lincoln: Vampire Hunter book is live and in your face.

The book was a little bit of a tongue in cheek affair as I understand it, the flick looks to be quite the opposite. Although the master of the macabre, Tim Burton, is involved as a producer- so looks might be just ever so slightly deceiving.