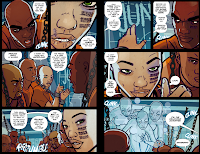 Remember Eraser? The 1996 blockbusters was one of Arnold Schwarzenegger's last big huge hits before taking office as CA's gov. It was also written by Tony Puryear, author of the upcoming 'Concrete Park'.

Dark Horse Presents #8 will play host to Puryear's first comic book foray, and boy does it sound like a winner:


Concrete Park is a dark and provocative near-future story. It takes place in a turbulent mega-city on a distant desert planet (think Cairo or Rio in space). Young human exiles from Earth must fight to make a new world there. They are “young, violent and ten billion miles from home.” In its ambitious scope, it resembles nothing so much as George R. R. Martin’s A Song of Ice and Fire series, but with favelas and aliens, cops and cyborgs, ghettos and gangs, instead of castles and armies.

Even more awesome is that Puryear did the pencils too. Now that's a talented guy. DHP#8 is coming to shops very soon but if you're looking for more from Tony, stay tuned for the big screen re-do of the literary classic- Farenheit 451. He penned the script for that one too.
Posted by The Angry Spark at 6:12 PM