If it's Super Bowl Time Then it's Madden Bowl Time 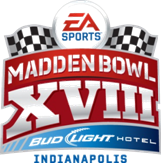 Even if you're not into the Giants or the Pats, chances are you're into Madden football if you're any kind of NFL fan. Apparently a lot of players like it too as the EA Madden Bowl will be featuring a lot of big time talent that won't be playing in the big game.

The tourney features a three man team format and will consist of 2 teams of pros, a team of legends, and a team of upcoming 2012 draftees. They'll fight it out via Xbox Live with each player taking control of different parts of a team. Rosters are pretty impressive too:

If you'd like to get in on the festivities and do a little 'game with fame', just send a friend request on over to 'NFLBaller2012' and start up a game of Madden '12 around 5:30pm EST on February 2nd (tomorrow)- oh, and don't forget your headset, because if you get an invite you'd best be ready for some football.

But wait, there's more!! At the conclusion of the tournament, there's gonna be a webcast performance by the Roots and NAS. That show will be kicking off at 11pm (EST) If you want to watch, RSVP yourself at Madden NFL Facebook page