EA's Kingdoms of Amalur: Reckoning is getting ready to storm retail and digital store shelves worldwide. But before it does, 38 Studios head (and all time great ballplayer) Curt Shilling would like to share his thoughts on the game.

Amalur looks like a fantastic title and is getting a fare share of good word of mouth. I guess it should with the likes of Todd McFarlane (comic artist extraordinaire) and R.A. Salvatore (famed fantasy novel scribe) behind it. But it's just kind of cool to see a big videogame fan like Shilling getting ready to release a big time console/PC game. Here's what the main man had to say in the fourth installment of Reckoning Visionary Newsletter: (Fair warning- he's talkative)

For me, the launch of Reckoning is the realization of more than thirty years of gaming and dreaming. 38 Studios is the embodiment of that gaming life, and to finally see the results of the dedicated and passionate team at Big Huge Games is beyond words.

I started gaming on an Apple computer in 1981, and after doing some early coding in BASIC, I started to play games like the ASCII-based Star Trek and Wizardry. I was hooked from the outset. And like many of you, I‘ve played hundreds of games and thought “Wow, I could do that better” and asked “Why did they do that?” I imagine in most cases I was wrong. What I’ve come to realize is that often you can’t do it better and there are hundreds of reasons why they did that.

But, unlike most gamers, I also played professional baseball, and that afforded me the financial opportunity to act on those questions. That is where we are today. From a company perspective we have something we believe dearly in, that few others have, and it’s also something we never want to let go of. We are gamers who want to make awesome games for gamers. That might sound simplistic, but it’s far harder than it sounds. We are not publicly owned or traded, so our orders and direction are still entirely driven by the folks inside the company, us gamers. That’s huge, and also rare in game development these days.

But I would tell you this: ‘Making games’ is so vastly different than what I expected it to be. I do very little, if any, game making. There are actually some very good reasons why. First of all, I’m not all that good at it. Second and just as important, I looked far and wide and found people smarter and far more creative than I could ever be, and they’re the ones tasked with bringing Amalur to life.

This game, this world, is about the journey. 38 Studios’ moment of creation, believe it or not, happened over TeamSpeak during an EverQuest 2 raid. The first core group of employees, those folks here on day one, were mainly members of our guild in EQ2 who had spent months talking back and forth about making games. Many of them worked at Sony Online Entertainment in San Diego at the time, and we were all pretty hardcore MMO players. Many a night was spent talking about this feature and that one, and what our games would be like.

At some point as the months rolled by I began to sense a stirring, internally, that I couldn’t shake. I had spent about 25 years gaming; it was as much a part of me as baseball. What was the next logical (or illogical depending on your perspective) step for me to take? 38 Studios (formerly Green Monster Games, but that’s a story for another time) was it. So like 99% of gamers around the world I thought I could do it better, and I thought I knew what features would be cooler. But unlike that same 99%, I actually took the next step.

38 Studios was formed in October of 2006, and Amalur was born. Now gamers around the world are on the precipice of stepping into that world, and I can’t really pinpoint the overriding emotion. Fear? Anxiety? Excitement? Terror? It’s all of those things, and more. In my former job, I had an overwhelming amount control and responsibility -- until I let go of the ball. In a sense, the launch of Reckoning is me doing just that. It’s out of my hands now.

This team has done everything it could to make this game worthy of players’ time and hard-earned money, and I think players will feel the passion and love the Big Huge team has invested in this world. This is, and has always been, much bigger than any single game or piece of the Amalur universe. It’s always been about changing the way we are entertained.

Reckoning is the ‘kickoff’ so to speak. Starting with Reckoning, and heading down this path we’ve chosen to Project Copernicus, our MMO, we have grandiose visions of things we can and will do to try and create the next great fantasy world. Amalur began years ago (10,000 years ago, according to R. A. Salvatore), and we plan on living and breathing this universe for as long as you will let us. 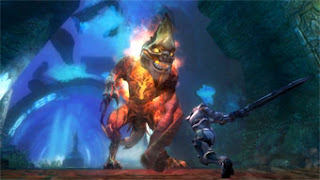