Although Imagination Brands' Doodle Roll hasn't been around all that long as of yet (it was released last Summer) it's fast become a favorite toy of critics and kids alike, taking home a boat load of awards.

The latest prize nabbed by the roll-out art studio is the Parenting Magazine 'Best in Play' award for Toy Fair 2012. The mag sifted through quite a few entries in the creativity toy catagory (shown off at Toy Fair), but chose Doodle Roll as tops-


“It is extremely gratifying to have been recognized by such a prestigious and trusted publication as one of Toy Fair 2012 ‘Best in Play’,” said Marc Cooper, Chief Doodle Officer of Imagination Brands and cocreator of the Doodle Roll®. “The entire team, including our valuable vendors, has worked exceptionally hard over the past year to deliver a top quality product that not only looks first class but functions extremely well. It is amazing how far we have come in such a short time and it is truly exciting to have so many Doodle Roll® versions and other products in the pipe line.” 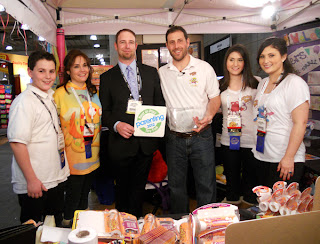 The toy is actually pretty neat- if you're not familiar with the product, it features a 30' roll-out paper canvas and storage for crayons. Imagination Brands also says they'll be rolling (*ahem) a bunch of new stuff throughout the year- you can check them out right here.
Posted by The Angry Spark at 12:33 PM