How long has it been since Earthworm Jim has seen a toy line? Playmates' lineup of cartoon based figures from the ate '90s is pretty much the only thing that comes to mind. Now Mezco is about to rectify that situation with a fresh assortment of collectibles based on the worm in the power suit.

Developer Shiny's EWJ was always one of my favorite titles from the silver age of the side-scroller genre. It just had all the right conventions and hit all the best possible notes- played like a dream too.  In fact, I can recall many a day whiling away the time playing Jim on my Nomad... loved that little console. But I digress...


One of the biggest plusses of the series, was the tremendously imaginative character designs. The Earthworm Jim aside (he's a mutated earthworm in a humanoid battle suit); there was his main antagonist PsyCrowe (exactly what he sounds like), Evil the Cat, and loads more. Right now, all Mezco is showing off is an action figure of the main man worm and a plush toy- lets hope that gets an expansion. 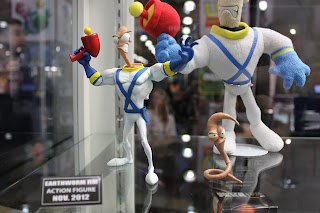 Even without a game or show behind him, it's not hard to envision an Earthworm Jim toy series being a nice little hit. Mezco seems like a good fit too and the sculpting looks great on what was shown- crossing fingers... now.
Posted by The Angry Spark at 4:24 PM