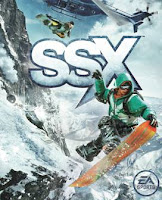 EA's upcoming reinvention of the classic extreme sports title SSX is almost upon us- and it's bringing a pretty big name soundtrack with it.

“SSX has always been one of EA’s most music intensive, genre diverse and sonically adventurous titles,” says Steve Schnur, Worldwide Executive of Music & Music Marketing. “The songs on this new soundtrack cover ground from indie rock, dub step, hip-hop, drum + bass and beyond. As fans of the ultimate snowboarding franchise have come to expect, our artists range from top cutting-edge stars to tomorrow’s hottest underground acts. Ultimately, it’s a soundtrack full of next-level music that is totally ripe for discovery.”

Probably could have done without the dub step, but if you don't care for something on the packed in playlist, you can add in your own tunes. That's always an appreciated feature. There's also something called a 'dynamic music remix' tool happening here. What's that do?

SSX also features a dynamic music remix tool that will automatically remix licensed tracks and custom music based on the player’s actions and performance in-game.

Sounds like some cool stuff- getting a true dynamic and changing background score might be a little bit of a challenge considering we're not just talking about orchestral tracks here. Switching things up in a piece of music that has vocals in it might be somewhat dicey. We shall see.

While we all wait for the game to drop into stores at the end of this month, why not peruse the complete track list? There's bound to be something you'll like... or not. Who can tell anymore, you're so picky.