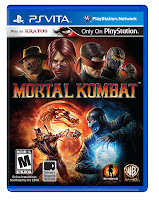 Warner Brothers today announced that the critically and fan praised reboot of Mortal Kombat is headed to the Playstation Vita.


“The NetherRealm team is committed to making sure that we follow up the success of 2011’s Mortal Kombat with an equally compelling experience on the PlayStation Vita,” said Ed Boon, Creative Director, NetherRealm Studios. “The original game content and new features we developed for the PlayStation Vita will provide gamers with the best fighting game experience available on the new mobile platform.”

No firm release date as of yet- just a vague 'Spring 2012', which would put it at the launch window. Also, though unannounced in the release, it's pretty obvious from the packaging that this is the 'Komplete' edition of the game.

If you're not aware, the Komplete edition includes all the dlc that was released and will be launching February 28th for consoles.
Posted by The Angry Spark at 12:15 PM