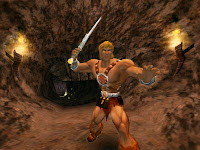 This past December, the Master of the Universe line from Mattel (specifically mattycollector.com) stubbed it's toe and missed it's monthly shipment to the waiting arms of subscribers everywhere. If you were one of the afflicted, you were probably more than a little PO'd that you missed your Holiday gift... to yourself.

Well, good news.
Just this week, subscriber's email inbox's were hit with shipping announcements and there was much joy. Now, remember that earlier this month we posted up a link to the revised Matty schedule for 2012. If you're too lazy to click through the links- basically you're still going to be getting everything you ordered if you signed on for a new subby, it's just that everything's a little out of whack and not all the figs are shipping in the month's they were meant for.

All in all, could have been a lot worse.

*Yes, there was a He-Man game. Yes, that screen is from it. Yes, it actually was released... it was a budget title.
Posted by The Angry Spark at 7:33 PM