The Walking Dead rise again- with a second series of Minimates

The first series of DST's The Walking Dead Minimates aren't even out yet, but like a walker that just won't stop coming- another set of two-packs are on the way for November.

Of course, these little guys are so cool, you wouldn't find me complaining if Diamond Select cranked out a series every month. Did you read that Diamond? YOU COULD MAKE A NEW SERIES EVERY MONTH. *ahem, just sayin'... anyway-

Series two continues the packing from series one in that every human character (and there are some real fan faves in this set) will be packaged with a zombie- and there will be a zombie two-pack as well. That one's good for helping to "pad out your zombie herd". 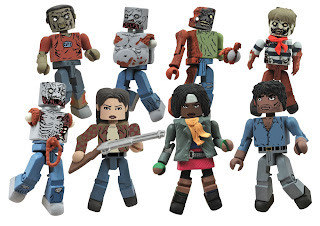 Now as usual with Minimates, there will be two different assortments offered- one for specialty and comic shops and one for toy giant Toys R Us. And we're not just talking packings here, there will actually be different figures to hunt for depending on where you're shopping- but if you're a Minimate fan, you know all this already. So here's your breakdown on what zed's where: