The show is about an apocalyptic future where humans have integrated themselves with a computer chip called HPlus. The chip basically plugs the user into the internet 24/7. Everything's great with it, until a virus causes a third of the entire population of the planet to die off in a single day. H+ deals withe the aftermath of such an event and the effects it would have on every facet of everyday life. 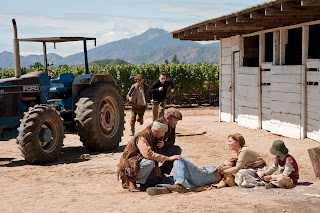 If you head over to the show's YouTube page (which is here) you can not only check out the first two installments (of which forty-eight are planned with two rolling out every Wednesday), but you can also check out weekly recaps, discussions with the creators John Cabrera and Cosimo De Tommaso, and even take part in Q&A sessions. Pretty neat stuff and a really new idea and format for a web show.

Something else that's really unique about H+, it's been crafted so that the viewer can watch any of the 48 episodes (once they're all out) in any order they want.


“This multifaceted, sci-fi series is perfect for the Internet as it tells the story from different characters’ perspectives - jumping from time, place and viewpoint as the narrative comes together,” said Bryan Singer, Producer. “These short, addictive episodes each end with a cliffhanger. As more episodes debut, the audience has the unique ability to rearrange them sequentially or by characters’ storylines or locations, so that they can retell our story in their own preference.”

Now that's just cool isn't it?
Posted by The Angry Spark at 1:48 AM