Review: The North End of the World (comics)

The North End of the World mixes real world history into folklore in a beautifully told story about the the Indians of the Pacific Northwest- and a man obsessed with their way of life.
Edward Sheriff Curtis was one of the greatest chroniclers of Native American culture to ever snap a photo. A photographer and photo shop owner by trade, Curtis eventually moved onto his life's obsession- capturing the Native American as he was before European influence.

His work (especially that of his commissioned, multi-volume book series The North American Indian) became extremely important after his death, though it was heavily under appreciated at the time of it's 'completion'. Of the twenty volumes that were originally planned, only nineteen were actually produced- and that was a bit of a miracle given the fact that his funding all but dried up completely.

The North End of the World is based largely on actual happenings in Curtis' life and the time he spent with several American Indian tribes. This is fiction (mostly), so there are some heavy additions in the way of supernatural elements throughout. Everything's grounded in Native American culture though and is very authentic feeling. You'll actually learn something in here too- I think this might be one of the only times a graphic novel actually taught me something about an actual person. Points for that alone. 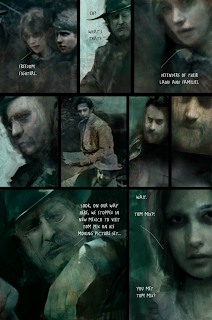 Opening in 1952 L.A., The North End of the World finds Curtis in his twilight, an elderly man living with his daughter and her family in California. His adventuring days are largely over although he clearly doesn't feel like they are.

The scene is knee deep in high strangeness; it opens the book and the character that we meet who's sitting with Curtis hasn't been properly introduced as of yet. Seated with the photographer is a man with a massive raven's head. It really sets the tone for the remainder of the story. A dark and twisting tale of a culture being pushed to the brink and a man who doesn't really understand the very forces he's attempting to revive.

Most of The North End of the World takes place in the early 1900's. We follow Curtis as he films what's originally pitched as a cheap money grab of a movie- something so he can continue to fund his volumes of Native American photo's once his chief backer, J.P. Morgan, dies. With no money in the coffers, he has no choice but to try and do something that he hates- cash in on the 'Hollywood' version of the people he's trying to save.

Curtis heads up to his former home in Seattle and collects his daughter Beth and his good friend George to help him and his crew with the filming of the tribe he's chosen, the Kwakiutl. George is a Native himself and a practicer of Hamatsa. This ancient ceremony is said to involve cannibalism and a dark figure known only as the Cannibal at the North End of the World. Curtis wants all that in the movie too, which is something that George vehemently refuses.

The story plays out in the lush visual style of Christopher Shy (Soul Stealer). This is the first time I've seen Shy tackle a more natural setting and he does so with his usual levels of detail and dark imagery. From the burning, sun drenched deserts to the rainy, dark shorefronts of British Columbia- this is just a gorgeous book all around. 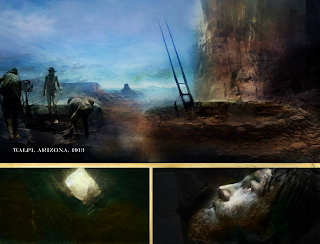 Shy's natural landscapes are amazing with a level of detail and color that perfectly sets the tone for the accompanying story. And the Native American stuff is on a whole 'nother level. The masks, totems, and costumes- especially the raven costume from one particular scene -are fantastically designed. Most of what Shy does seems less like it should be in a 'comic' book and more like it should be hanging on a wall in a gallery somewhere.

Equally beautiful is the story that's been written by Dave Hunsaker. This is not an overly 'feel good' story by any means. Even the base that Hunsaker has built upon isn't all that warm and fuzzy. Essentially, this is the story of the end of a way of life for thousands of people- Curtis included. 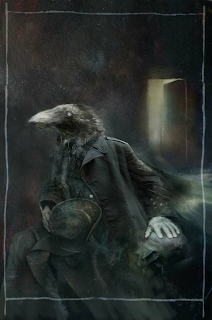 The Native Americans were forcefully adapted to the ways of the expanding European peoples that arrived to 'colonize'
(and eventually dominate) what would become the United States. It's really a sad story and the tale that's told in The North End of the World is bound to this historical event.

The book creates a narrative all it's own though, as Hunsaker walks Curtis through hell and back until the visual historian truly realizes what it is that's most important in his life. It's touching as it is harrowing. Even though there isn't a ton of what comic fans are used to in the way of action- there are plenty of supernatural elements along the road to the conclusion. Gods and monsters abound, just in a very Native American way.

The North End of the World is a bittersweet story of obsession and what happens when a man gets lost in his singular driving force. It's also the story of the ego in a way and hunting down some perceived greatness, all the while not realizing what you have in your life might be pretty great already.

Although the book can certainly be enjoyed on it's own, I do recommend taking a short look at the life of Edward Sheriff Curtis. Even just skimming through the Wiki on him will give you a firmer grasp on the man (as well as the character) and who he was. Not the most likable guy in the world, but he sure did know how to take a picture.