FIFA and Madden confirmed for Wii U 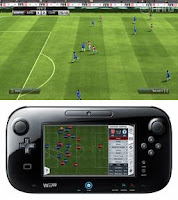 In an announcement that's a surprise only if the word 'obvious' means nothing to you, two of EA's biggest franchises will be coming to Nintendo's new Wii U.

Whenever the Wii U hits retail, and we still really don't know when that might be, both Madden NFL 13 and FIFA Soccer 13 will be coming along with it. Both titles are promising new ways to play with tailored experiences specifically designed for the Wii U.

In development at EA Canada, FIFA Soccer 13 features three new ways to play that bring players of all abilities together. Families can play together in Co-op Mode, where one player manages and up to four others play. Team Management Control features interactive radar to send players on supporting runs, attacking or defensive, and touch screen control to change tactics, formations or subs on the fly. Experience the thrill of managing your favorite football club in Manage Match, directing players from the sidelines and even giving half-time talks. View a statistical analysis of the match and any player at any time, enabling you to make informed decisions. Plus, connect and interact with friends like no other FIFA title. See your friends online and invite them to play, or message them in real time using touch screen typing. FIFA Soccer 13 features innovations utilizing the Wii U GamePad™ that immerse players in the action on the pitch. Gamers can lift and look through the GamePad touch screen to aim the ball on set pieces and penalty kicks, then put the perfect curve on a shot and let it fly. Shake the GamePad to activate Touch Screen Shooting, removing the element of ‘hit and hope’, and allowing for pinpoint accuracy. 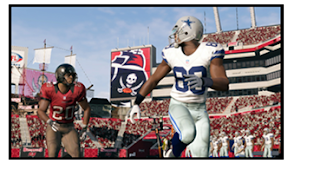 Madden NFL 13 on the Wii U delivers the most authentic NFL experience ever on a Nintendo platform, including core gameplay new to the franchise this year, beautiful HD graphics, the newest depth and career modes, and all-new touchscreen features exclusive to the Wii U.  With the all-new Connected Careers mode, you can build your own legacy as a player or a coach, or relive the glory of an all-time legend.  Plus, the new CBS commentary team of Jim Nantz and Phil Simms make every game feel like an authentic NFL broadcast, as they call the action from the 3D booth.  Get immersed into every game with features exclusive to the Wii U, including streamlined playcalling, pre-snap adjustments and personnel management - all directly from the innovative Wii U Gamepad touchscreen.  Madden NFL 13 on the Wii U brings next generation innovation, gameplay, and graphics straight to your living room like never before.

Just when we might be seeing these titles at retail is, again, kinda up in the air. I assume these will both be launch games though, since both are branded with the 2013 edition of their respective franchises. So... Novemberish?