Her Universe creator (and voice of Ahsoka Tano on The Clone Wars TV Show) Ashley Eckstein revealed the panels, cool happenings, and show exclusive items that the clothing and accessory company will have on hand for Star Wars Celebration VI later this month.

It just wouldn't be a Star Wars convention without some cool exclusives and Her Universe doesn't disappoint with a cool series of items that'll be up for sale. Check out that Mara Jade V-neck- amazing artwork on that one by the supremely talented Cat Staggs. 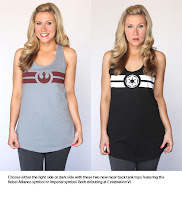 If panels are more your thing, then Her Universe has you covered there too. Eckstein will be hosting a very special panel about bullying and dealing with what's become a very hot-button issue. Something every young Jedi should sit in on.


In addition, Eckstein will be hosting a very special panel with author Carrie Goldman based on her new book, Bullied – What Every Parent, Teacher, and Kid Needs to Know About Ending the Cycle of Fear. Carrie is the mother of Katie Goldman, the little girl who was bullied for carrying a Star Wars water bottle to school. Carrie has spent the past year and a half researching and writing about this topic and Ashley encourages fans to come and join the conversation. The panel will take place on Thursday, the 23rd from 3:30 PM - 4:30 PM in room W311 ABCD.

And finally, there's one seriously awesome photo shoot planned as Her Universe will be holding a photo shoot on Saturday the 25th with the chance for female fans to get their pic snapped by famed photog Preston Mack- wear your Her Universe Tee's and Hoodies!

After receiving hundreds of requests from female fans all over the country to be a Her Universe model, Eckstein (the voice of Ahsoka Tano on Star Wars: The Clone Wars) is offering a free Her Universe photo shoot on Saturday, the 25th from 10am till 7pm in room W305A. Girls are encouraged to come dressed in their favorite Her Universe top or hoodie to be photographed by professional photographer Preston Mack (www.pmack.com). Her Universe shirts will be provided just for the photo shoot if girls do not have one on that day. A sign-up sheet will be posted outside of room W305A that morning for those wishing to reserve a time slot and it will be first come, first served. The completed photos will be posted to a special photo board following the event on Facebook so girls can tag, share and download their photos. “Her Universe is a brand for the fans, and when the fans overwhelmingly tell me what they want, I do my best to make it happen,” said Ashley Eckstein. “It’s important to me that I am not the only Her Universe model because fangirls come in all ages, shapes and sizes and I want to represent the entire fangirl community by using real fans as my models. I am also so excited to have Preston Mack! He is such an accomplished photographer and I am honored that he will be sharing his time and talents with us!”

Star Wars Celebration VI takes place in Orlando, Florida - August 23rd through the 26th.
Posted by Jessica at 8:00 AM