The Hobbit to be a trilogy after all 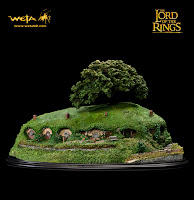 It's been rumored for a while now and it's finally been officially announced- Peter Jackson's upcoming The Hobbit films will indeed be expanded from a pair into a full fledged Lord of the Rings prequel trilogy.

Is there anybody who didn't want this to happen? Yeah, yeah, I know - It's just supposed to be one book! Here's my answer to that- who cares?

Jackson's Rings trilogy is one of the greatest trilogy's in modern or classic movie history. Who wouldn't want more of that? Right. Nobody. With three movies, we get every bit of story that's worth telling out of the first adventure in the Lord of the Rings series- and if you're ever going to have faith in a director/creative mind, put it in Jackson when it comes to LotR. The man just knows what he's doing.

Here's how the moves will shake out- it's a little bit of a surprise where part three will end up:


Summer huh? Honestly, when I heard there were to be a trio of films, I was looking forward to three Holiday seasons in a row with new Rings movies. Oh well, Summer blockbuster it is then.

Read on here for the full release.

The picture of Bag End that you see above, by the way, is a limited sculpture from Weta. It's super detailed and a pretty awesome piece if you're a big fan of Rings. You can order one up right here for $130.00 USD- which is not bad at all for something like this.
Posted by The Angry Spark at 12:49 AM