'Scarlett and the Spark of Life' Musings 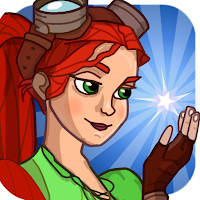 Do you like old school adventure games? You know, you move the cursor around the screen till you hit on some hot spots and then you click 'em. You pick up (sometimes nonsensical) items and use them to solve puzzles... If you played PC games 'back in the day', then you more than likely know exactly what I'm talking about. And you more than likely have more than a few fond memories of those old games.

I'm digressing too much here, but memories of Space Quest, Day of the Tentacle, Full Throttle- and going back even further -King's Quest, just kept popping into my mind as I played through Scarlett's first adventure on the iPhone.


Scarlett and the Spark of Life is the first part in a new ongoing series of adventure games on the iPhone. It has many of the standard play mechanics of the now classic genre- just converted over from point and click to point and tap. But capturing the feel of those old PC games can be a tricky beast, does Scarlett pull it off?

Right from the start, Scarlett hits you with two things- the graphic style has a very nice hand-drawn look to it and this isn't the most serious of adventures.

Lets start with the story- the tale of a princess in distress... with a twist. Scarlett has been drugged and kidnapped for ransom but on their way to wherever it is they're going, Scarlett frees herself, escapes the pair of dopey thugs transporting her, and the game begins. The main story, there are no optional side-quests, revolves around Scarlett being stuck in a horseless town- her only means of escape being to finish construction of an abandoned, half built, robot horse... that talks. And really thinks a lot of itself.

It's funny stuff, and the puzzles are clever but not outrageously abstract- which is something of a trap that adventure games can get stuck in just for the sake of making things overly hard. The pipe organ puzzle is particularly interesting (you'll find out) and all of the puzzles make sense and can be solved with a little thinking or talking to the person who would logically be able to help.

Speaking of, there aren't that many characters to talk to since the mountain-side village setting is mostly vacated thanks to a local festival several miles away.Those who are present have some varying personalities are well written for the most part and fun to talk to. The script is worth more than a few chuckles- in fact in some places it's downright lol-worthy.

Gameplay wise, this is standard point and click tap, but to be honest there isn't really much you can do to make it unique or different. The genre itself is somewhat limiting in that respect. Occasionally, tapping an item from inventory and dragging it over to its target can be mis-read by the game, but that was the only problem I encountered. Overall- everything works as it should and that's all you can ask from this type of game.

The bottom line is that I really enjoyed Scarlett. It's comedic flavor, classic art style, and solid controls made me smile all by themselves- and not solely for the sake of nostalgia either. It's a little short but is genuinely enjoyable stuff and I'm very much looking forward to part two-

Scarlett and the Spark of Life is available now on the App store for the iPhone and iPod Touch for $2.99 and is well worth it.
Posted by The Angry Spark at 11:00 AM