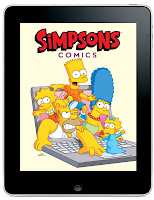 The dedicated App, which is available now, gives fans of the classic cartoon family access to a host of comics featuring the group. It comes courtesy of comiXology, who already have The Simpsons 'on paper' exploits available on their popular reader for iOS, Android, the Web, and Kindle Fire.


“It’s hard to contain my joy that comiXology is powering the Simpson Comics app and working with Matt Groening," said comiXology CEO and Co-Founder David Steinberger. "We are huge Simpsons fans over here at comiXology and being able to deliver The Simpsons Comics app as well as featuring The Simpsons comics on the comiXology platform for iOS, Web, Android and Kindle Fire is sweet, indeed.”

To start things off, a free copy of The Simpsons #100 will be available today through comixology.com The complete selection you'll find on the App (at launch) reads a little something like this:


The Simpsons Comic App is a free universal download from the iOS App Store.
Posted by The Angry Spark at 2:20 PM