The classic mini-figure series Battle Beasts mad a comeback in a big way at the San Diego Comic Con last week. Not only did Diamond Select Toys unveil their new BB Mini-Mates, but the company also showed off the new comic and... guitar?

*Update* These actually aren't your father's Battle Beasts.
DST has informed us here on the Spark that the new BB's aren't actually linked to the original toys in any way other than their name, which Diamond owns. The whole new storyline and all the characters are wholly theirs. Weird? Maybe a little- but the end result is still pretty freakin' cool. Read on for our original take (before we were learned in the ways of the modern 'Beast) on the new line. -Ed

Battle Beasts, if you don't know, was an action figure property from the late '80s that featured heavily armed and armored animal-like creatures. They had some pretty awesome sculpts for their time and were a particular favorite of mine. The figs also featured a cool symbol system that basically played a game of rock/paper/scissors to see which characters could best each other in combat.

Now with the license all wrapped up and toys (and additional media) all figured out, DST has fully revealed the initial lineup for the new Battle Beasts reboot- and it's unsurprisingly awesome. I've always liked the mimi-mate form factor, but seeing these little guys live and in living plastic again is just way too cool.

The first two pack to be produced for the line includes (the main character) Vorin and the insectoid (and SDCC exclusive) Zik. This pack was available for purchase at Comic Con and we'll have a full review here on the site in the next couple of days. The entire first run of toys was also shown off- though they won't be available to add into your collection till December. Just in time for the Holidays!

A special first issue of the new comic book was also on hand. The book had a limited alternate cover that featured the San Diego Convention Center, pretty cool stuff. Diamond even had series writer Bobby Curnow and cover artist Ulises Farinas on hand doing signings and handing out free ashcans of the book. Remember those? Ashcans? Used to love those things... anyway- where does that guitar come in? 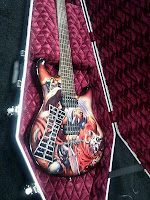 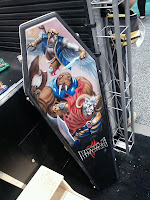 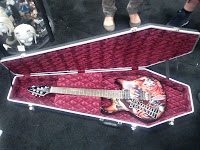 It's pretty cool actually. DST did a giveaway at their SDCC booth for a special edition Peavy guitar (and matching case by Coffin Case) emblazoned with the artwork of Dan Brereton from the first issue of the new book. And while we're on the subject- Diamond also had San Diego hopping with a premier party at the Haunted Hotel (not as scary as it sounds).

Held on the Con's preview night (Thursday), the party was co-hosted by DST, Coffin Case, Dig Deep Entertainment, and Heavy Metal magazine. It was also the debut event for the Battle Beasts motion comic.