Aside form a healthy selection of panels and presentations, publisher Image Comics has a whole mess of exclusives in store for show-goers. There are a ton of variant covers, an action figure, and... a watch?

Yeah, it's a timepiece all right- but this just might be the most infectious timepiece you'll ever own. 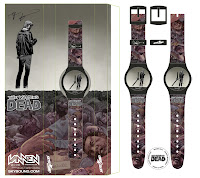 THE WALKING DEAD #100 Vannen Watch
In honor of The Walking Dead's 100th issue, Skybound and Vannen watches bring you a limited edition timepiece. The watch features art from Charlie Adlard's issue #100 cover. Each watch is signed by Robert Kirkman.
$85.00
Limited to 500 units, One per person

That's not all there is for Dead fans though- If you read this site regularly, then you'll remember that awesome hardcover tome, The Walking Dead Compendium will also be available at the show. But seriously, once that one's gone, it's gone.

And rounding out the offerings is one very cool action figure. Fan favorite Michonne will be blister packed and ready to take home with a 'bloody' variant edition figure that shows the character in her first appearance.


Not a The Walking Dead fan? Don't worry, Image has some nice little exclusive comics for you too.

CHEW: SECRET AGENT POYO #1 Guillory Comic-Con Exclusive Variant Cover
A one-shot spinning off CHEW's most popular supporting character, and comics' most beloved homicidal cybernetic kung-fu rooster. Concentrated mayhem. Feathers, rage and hate! Plus: an all-star pin-up gallery from some of the most staggeringly talented artists in the industry!
$10.00
Limited to 700 copies

SKULLKICKERS #15 Kitten Variant Cover
Created as a gag cover to appear in previews so as not to spoil earlier issues, this kitten cover by Edwin Huang and Misty Coates is now available to purchase thanks to popular demand! Don't let the kitten fool you, though. Inside is heinous violence, trouble-making and all the skullkicking you can handle.
$3.50
Limited to 500 copies

SUNSET Limited Edition Comic-Con Exclusive Hardcover
A Comic-Con Debut Original Graphic Novel! Sometimes all you can do is go out with guns blazing... CHRISTOS GAGE and JORGE LUCAS debut their hard-hitting old man noir original graphic novel - SUNSET. On the surface, Nick Bellamy looks like any other veteran retiree left behind by a modern world. In reality, Nick is a former enforcer, who stole a fortune and years of freedom from his former mob boss. This limited edition variant will feature a foil stamped logo and an exclusive book plate.
$30
Limited to 250 copies

THE DARKNESS #105 Portacio Comic-Con Exclusive Variant Cover
Concluding DAVID HINE and JEREMY HAUN's explosive opening story arc, this issue sees Jackie Estacado, bearer of the Darkness, confronted with the fact that his perfect world is falling apart. Available only at Comic-Con, this exclusive cover by WHILCE PORTACIO features The Darkness and his Darklings! Rated Mature.
$10
Limited to 500 copies

THINK TANK #1 Bagus Variant Cover
A Comic-Con Debut Issue! The action-packed science series from MATT HAWKINS and RAHSAN EKEDAL tells the tale of a brilliant scientist trapped in a military think tank and his attempt to escape. Available only at Comic-Con, this exclusive cover by BAGUS HUTOMO introduces the world to slacker genius scientist - Dr. David Loren! Rated Teen Plus.
$10
Limited to 500 copies


Top Cow Comic-Con Exclusive Variant Set
Get all three of Top Cow's exclusive variant covers for only $25, a $5 savings!
$25


All the Image stuff (including The Walking Dead merch) will be available at the Image booth (natch). That's number 2729. If you want in on the Top Cow books, you'll need to hustle over to booth 2629... man, nothing is ever ea
Posted by The Angry Spark at 1:34 PM