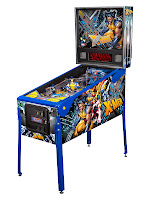 Fans looking to get their flippers working on Stern pinball's new X-Men tables need look no further than the biggest pop culture event of the year.

The San Diego Comic Con will be one of the first places where X-Men pinball will be shown off. Better yet- it'll be playable, tournament style.


Hundreds of thousands of San Diego Comic-Con attendees will be able to compete in an X-Men game play tournament for the chance to win a cash prize by signing up to play at booth #114. The tournament starts July 11, on Preview Night at Comic-Con. Contestants will be called to return if they advance in the tournament. The finals will be held on Saturday, July 14 at 3PM. Stern is thrilled to give pinball players and comic lovers at International Comic-Con 2012 a chance to experience the X-Men adventure with their own two hands

Competing in a pinball tournament at Comic Con... There's a movie idea in there somewhere, I just can't place it. Stern Pinball will be featured at the Media Nuclear Blast booth, which is number 114.
Posted by Jessica at 12:19 PM