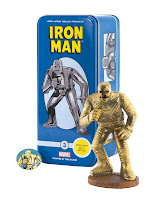 Dark Horse Deluxe announces their full slate of Comic Con exclusives as we roll ever onward towards the big event. What's on the list? Some Marvel favorites, a Good Luck pal, and Domo- dressed in his piratical best.


I cannot get enough of DHD's syroco statuettes. The vintage look of the little guys is just so stinkin' cool. Even the packaging is awesome as each one comes boxed in a collectable tin. They're retro, really well made, and plain old awesome. 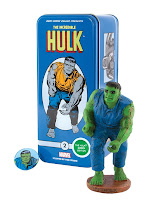 This year's SDCC showcases a pair of them whose fates (as far as comic book characters go) seem entwined: the Hulk and Iron Man. Both heroes are depicted in variant form- Hulk in his now more recognizable green color, and Mr. Stark in his gold shaded armor (handles the cold better). Both are awesome and limited to only 200 pieces. Once they're gone, they're gone.

Then there's also a certain slack-jawed monster type who's become a global phenom- Domo. This version of Domo is actually a Qee and is clad in his pirate best. He's sure to be gone quickly as Qee's have a tendency to not last all that long (and there'll only be 1500 up for sale)- so you might want to grab one ASAP... or at least, as soon as the doors open on the Con. 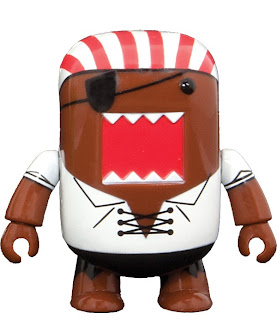 And finally, the last exclusive making it's way to the show floor is none other than the rebirth of the classic Good Luck Troll. The little dudes have never looked better as they start off on the road back to specialty shops in style.

The green Troll offered at the upcoming SDCC is a cool green color (with red eyes!) and is actually black light reactive. So if you take a black light to his hair- it'll glow! Much like Domo (and the Marvel syroco's for that matter), you're gonna want to grab one of these as soon as you can. There's only 1500 of them to go around, and lets be honest- is there anyone who doesn't have a soft spot for Troll dolls?