Get lost in Lost Angeles 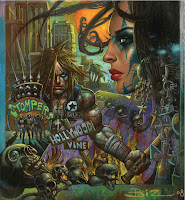 Publisher IDW brings a new tale of post-apocalytic LA to the world of comic books from the mind of Kevin Eastman (and Simon Bisley and Joe Pearson too!).


Things in one of California's biggest cities, Los Angeles, have especially gone down the tubes as vicious gangs have taken over and locked horns in a constant and never-ending battle for turf. And it's in the middle of all this that the starring duo of Mikal and Angel find their story playing out.

Between Pearson, Bisley, and Eastman, Lost Angeles has itself a top flight creative team. The original idea for the story was put together by Eastman and Bisley with the script being penned by all three men. Bis will also provide the covers while the meat and potatoes pencils and inks will be crafted by Eastman. For his part, the Teenage Mutant Ninja Turtles co-daddy is pretty stoked:

"I am THRILLED to be back at the creative table with my good friend Simon Bisely, and the very talented Joe Pearson--this is one of the coolest projects I have been involved with in a great many years--and my first solo art project in more than two decades!" explains Kevin "I can wait to show the fans what I'm going to do he--my career as a artist is about to go into high gear!"

Look for Lost Angeles later this year.
Posted by The Angry Spark at 1:26 AM