It's not a game and it's not even really an App per say, but Cellfish's Marvel's The Avengers Live Wallpaper app is a juggernaut at 1.3 million downloads.

That's a pretty impressive number for a wallpaper app- even one that's this cool.


“We’re thrilled with fans’ response to our Marvel’s The Avengers Live Wallpaper app for Android. Clearly, people want to carry a little bit of the movie experience with them all the time, and our personalization options have responded to that need,” said Julien Mitelberg, Co-Founder and Chief Operating Officer of Cellfish.

So if it's not a game- what's in the package? There are a pair of versions of the app (both free and paid) and if you're a big Thor and/or Hulk fan, you're in luck. 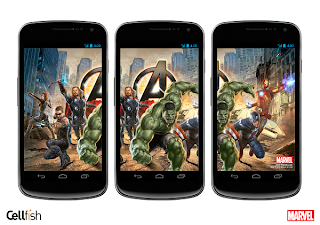 The free version of Marvel’s The Avengers Live Wallpaper app features Hulk and Thor, as well as the Super Hero team’s iconic logo displayed against an animated backdrop with lighting, smoke effects, and sky movement, with fun options like a “screen crack” message and call alert. Premium versions allow users to add all of the Avengers characters to the scene, and unlock more individual character wallpapers such as Iron Man and Captain America.  In addition, the premium versions include ringtones of audio clips from the film, and soundboard effects, where when users tap a character they hear phrases from the film. The premium Live Wallpaper & ringtone bundle is now available for only $1.99. Marvel’s The Avengers Live Wallpaper app for Android is available here: http://bit.ly/IIcyUg