The American Academy of Art has bestowed the famed comic (among other things) artist with its Distinguished Alumnus Award.

If you know the art of Alex Ross, then it's probably already a no-brainer to you that the man should get as much recognition as possible for his storied catalog of work. Whether it was the classic 'Marvels' (one of my own personal favorites), the equally impressive 'Kingdom Come', or just some of the greatest cover/marketing/concept art of all time- there's no denying that the man's skills are beyond impressive.

Now the American Academy grad (1989- Tim Burton Batman year!) has been awarded with one of the school's highest honors- named as a Distinguished Alumnus.


“We are proud of Alex and of all of his impressive achievements,” said Richard Otto, the Academy’s president.  “Alex is an inspiration to our students and thousands of artists, worldwide. He’s very deserving of the highest honor our school bestows.”

It honestly didn't take Ross all that long to find super-stardom in the comics world. After he graduated in '89, he landed Marvels for Marvel (duh) Comics and blew readers and critics alike away with his realistic look at superheroes from the viewpoint of a humble reporter tasked with covering these larger than life men and women. 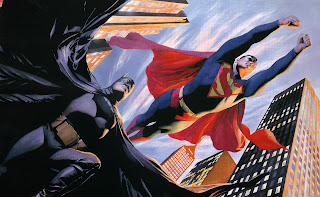 The book was an epic in every sense, still holding a treasured place in the heart of many a fan. Marvels would be just the first in a stellar career for Ross that is far from over as the artist is in as high a demand as he's ever been. As much adoration as he gets from the public at large though, Ross doesn't forget his roots- the school that gave him his start, or his own mother that inspired his career choice.


“It’s a great honor to have any kind of recognition like this and one I certainly did not expect,” Ross explained. “I’m thrilled that the school still offers the same education that I received, and by many of the same people who gave it to me 25 years ago.“

“I followed the path my mom had taken before me, when she attended the school back in the late ‘40s. Knowing that I wanted nothing else but to pursue a career in art since I was a kid made it easier for my parents to guide me in this direction, where we knew confidently my ambitions would be nurtured the best way possible.”

When asked about any advice that he might have for young artists just making their way, Ross answered:

The Distinguished Alumnus award is just the latest for Ross who is also the proud recipient of both the Harvey and the Eisner. Future work for the artist will include cover art for classic heroes like the Flash Gordon and the Shadow (!) and one of his latest efforts, the hardcover 'Mythology', is was lauded by the likes of Entertainment Weekly for it's "unparalleled sense of the real".

It's also a tome that I can heartily recommend to anyone who loves comic books and the heroes who inhabit their pages. It has a very permanent home on my bookshelf.